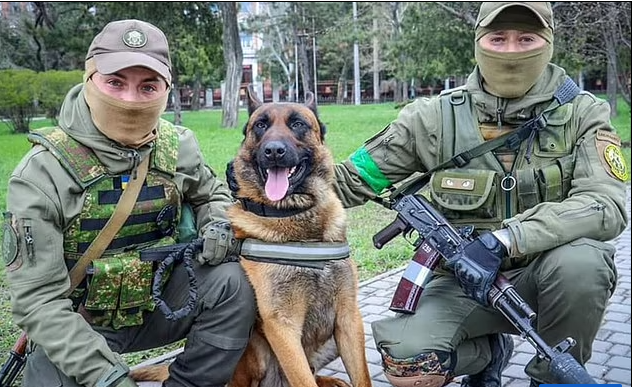 An abandoned Russian war dog has swapped sides – and is now saving Ukrainian soldiers on the battlefield.

Belgian Malinois Max, 3, was found starving by Ukrainians in the Mykolaiv region and was nursed back to health.

He has now been redeployed as a minesweeping dog after being taught to understand Ukrainian commands.

Dmitry, a member of the National Guard of Ukraine, said: ‘From now on, Max will serve on the right side, defending Ukraine and nibbling Russian asses.’

His comrade added: ‘Max has become a real favourite with the guards.

‘We can’t understand why the Russians would leave behind such as lovely animal.

‘Ukrainians love dogs, they regard them as part of the family.’

Max was found still wearing a camouflaged collar issued to the Russian hounds.

A British special forces soldier told the Daily Star: ‘Malinois are the same breed used by the SAS and the SBS. They are brave, highly intelligent and athletic animals.

‘They are tremendously loyal but Max has obviously been ­convinced that the Ukrainians are now his new masters.’

He added: ‘I’m very surprised that one of these animals was actually ­abandoned by the Russians because they are a highly-prized asset.

‘Also the bond between a dog and its handler is very strong.

‘It would be like leaving a member of your family behind.’

Max is not the only pooch who is making an effort to protect Ukrainians.