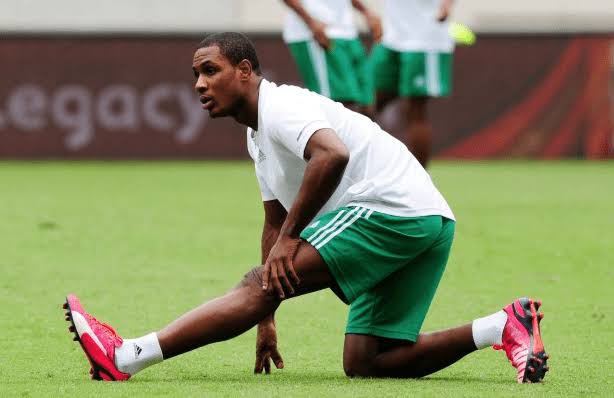 Odion Ighalo wished his son a happy birthday after scoring two goals to give Nigeria victory over Libya.

Super Eagles forward Odion Ighalo has revealed that his brace in Nigeria’s 3-2 win against Libya in a 2019 Africa Cup of Nations (AFCON) qualifier is a birthday gift for his son.

The forward scored two goals in the game as the Super Eagles laboured to a 3-2 win over Libya in Sfax Tunisia.

Ighalo on goal against Libya
In an interview Ighalo revealed the technique in which he used to convert the winning goal despite many defenders surrounding him.

When asked how he confused the defenders with trickery to slot in through past the Libyan goalkeeper.

He said, “The ball bounced i wanted to shoot at first, but i saw the two defenders i knew they were going to sleep on the ground.

“So i had to cut it and the post was wide open so i just tried to place it behind the keeper with my left foot and thank God the ball went in the rest is history. ”

The third goal was the winner but it was also Ighalo who opened the scoring when he converted a ball through to him by captain Ahmed Musa to slot into an empty post.

Ighalo took to his official Instagram account to celebrate the win and his contribution in the game.

The 30-year-old forward posted a picture of his son Samuel Ighalo who celebrated his birthday.

The message to his son on his official Instagram account said, “Happy birthday to my beloved Son Samuel Ighalo a.k.a Ajegunle grow in wisdom,knowledge and prosper”

Ighalo who has been scoring goals in the Chinese Super League (CSL) is expected to join up with the Super Eagles for the next clash against away to South Africa on Saturday, November 17.

Share this on WhatsApp
Related Topics:ODION IghaloSuper Eagle
Up Next