The Senate has described as one-sided a report by its joint Committee on Police Affairs and National Security and Intelligence.
At the plenary on Wednesday, senators who spoke on the report presented by the chairman of the panel, Senator Abu Ibrahim, said it only had the submissions of the Inspector General of Police, Mr. Ibrahim Idris, who made a series of allegations against Governor Samuel Ortom of Benue State.
Senate President Bukola Saraki ruled that the report be stepped down, while the panel should meet with Ortom and report backwithin one week.
The panel was set up to investigate efforts by the Police to end the killings in Benue State.
The governor and the IGP have engaged in brickbats since the Benue killings broke out January 1.
While Ortom alleged Idris is complicit in the killing, the police boss condemned the state’s anti-open grazing law.
PV: 0 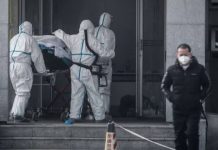