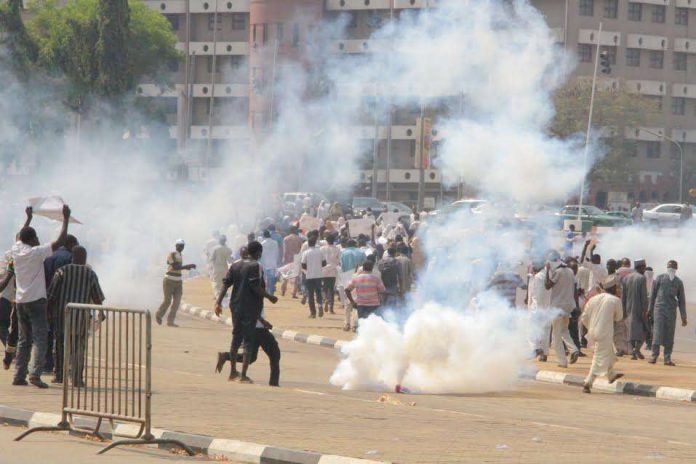 No fewer than 30 people were injured as security agents fired tear gas into protesting Shiites in Abuja on Monday.
One protester was also confirmed dead.
The Shiites spokesperson Ibrahim Musa said that over 200 protesters were also arrested by the police.
“We were carrying out a peaceful protest starting from the Unity Fountain. All of a sudden, they began to attack us. They were the ones who started firing (at) us with teargas.
“We were not violent in our procession but we had to defend ourselves somehow and that was why we attacked back.”
Videos and footages of the clash are now online.
The Shiites spokesperson, however, vowed not to relent until their leader is released.
“We are demanding the release of our leader. Tomorrow, insha Allah, we are coming out to continue the protest,” Musa said.
The protesters were demanding the release of the leader of Islamic Movement of Nigeria, Ibrahim El-Zakzaky, detained without trial for over two years.
His detention followed a violent encounter between the IMN and a convoy of Chief of Army Staff Tukur Buratai.
Over 300 Shiite members, including Mr El-Zakzaky’s sons, were killed in the violence.
Abuja Commissioner of Police Sadiq Bello placed an indefinite ban on daily sit-outs at Unity Fountain by activists.
He said they constitute a public nuisance to other Nigerians.
Police authorities said they will soon release an official statement on the clash.
PV: 0