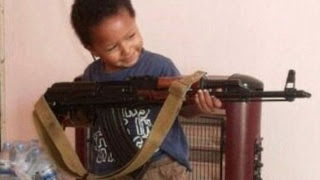 The grandfather of a British born boy, known as ‘Jihadi Junior’ in the ISIS camp, has begged the world to save his grandson from the clutches of the terrorist group.
The boy, Isa Dare, 4, was identified by his grandfather, a London-based cab driver, Henry Sunday Dare, 59, in the latest ISIS execution video.the video, the boy is seen in full military fatigue and an ISIS bandanna.
He said: “We’re going to kill the kaffir (non-believers).”
Isa was taken by his mother, Grace ‘Khadija’ Dare, 24, to Syria three years ago.
According to Dailymail, Dare said the kid had once cried out for help during a phone call with him.
Isa told him: “Please save me granddad.”
According to Dare, Isa was just making threats to nonbelievers, unaware of the import of his words because “he’s just a kid. He’s a minor, he’s under five. He’s acting under the influence of ISIS guerrillas. He’s too young. He’s propaganda. They are just using a small boy. They are using him as a shield.” Dare urged Grace to return to Britain.
He said Grace told him that she was going to Egypt to study and then she called to say she was in Syria.
Dare said he was disappointed and angry.
He had reported his daughter thrice to the police when he felt she was behaving funny. But police told him that Grace was above 18.
Dare said: “I’m totally disappointed. She was a Christian, she was brought up in a Christian way – all of a sudden she decided to become a Muslim. I saw my grandson two or three years ago, before they went to Syria.”
Fuming, Dare said police should do everything to bring his grandson back to safety.
British security agents are already examining the video. Dailymail said Grace may have been radicalised online.
Grace changed her first name to Khadija after she began attending a mosque.
Grace, born in London in 1991 of Nigerian descent, went to Syria around 2012 and married a Swede known as Abu Bakr. Bakr is now dead.
Grace, via social media, said she wanted to be the first British woman to kill an ISIS hostage.
More than 30 UK children have already been made the subject of family court orders over radicalisation fears, Scotland Yard has revealed.