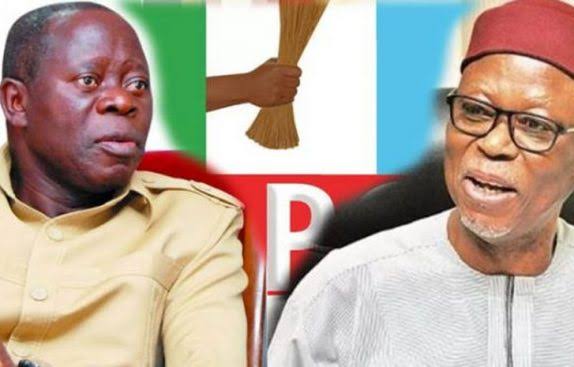 Former national chairman of the ruling All Progressives Congress (APC), Chief John E. K. Odigie-Oyegun, a former Governor of Edo State, has issued a strong warning to the controversial APC national chairman, Adams Oshiomhole,  to stay off the primary election of the party for the nomination of governorship candidate for the September election in Edo State, as well as Ondo State.

Oyegun in a statement on Wednesday cautioned Oshiomhole to eschew from any form of interference with the APC primary election and perish any plan to impose governorship candidate on the party or the people of Edo State. The former APC national chairman further warned against the use of thugs to obstruct the electoral process in the state. He decried that weeks INEC has released the timetable for the governorship elections in Edo and Ondo states the national APC leadership has not considered it necessary to issue guidelines for the primary election and nomination of candidates in Edo and Ondo states. This, he said, raises suspicion of grand plot to scuttle the party’s primary election, warning of the consequences that it is no longer business as usual.

The former APC national chairman acknowledged the endorsement of President Muhammadu Buhari of the agreement to resolve the leadership crisis in the party, as well as return the governors of Edo and Ondo states for second tenure.

“I also welcome most warmly the news that Mr. President has firmly endorsed the agreement reached to settle the disruptive leadership crisis at the national level that was threatening the very existence of the All Progressives Congress (APC). He advocated for consensus to return the governors of Edo and Ondo states for second tenure since they performed creditably in the first tenure.

“The immediately relevant part of the agreement was that both the governors; Godwin Nogheghase Obaseki of Edo State and Oluwarotimi Odunayo Akeredolu SAN of Ondo State have performed creditably and should be returned unless they do not so wish.

“This means that the party, in unity, should organise to support the return of both governors,” Odigie-Oyegun declared.

The former APC national chairman maintained: “therefore, given the widely known peculiarities of Edo State, if a consensus cannot be built behind the incumbent, everything must be done to ensure that the persons in the leadership of the party at the centre who are part of the contrived crisis in Edo State must not even remotely be allowed to plan, participate or supervise the primary election.

“It is of critical importance that the primary be seen even by a blind man, to be free and fair, otherwise, there would be political consequences.”

Oyegun further cautioned that allowing any member(s) of the national leadership who have been involved in the contrived crisis in Edo State would equate making such person or persons judges in their own case. This, he stated, is contrary to the principle of natural justice and will be naturally resisted.

Oyegun insisted that transparency must start with the guidelines as to how the primary elections will be conducted in Edo and Ondo states. He decried that this is yet to be issued, even though dates have been announced.

The former APC national chairman warned that the nature of the primary election in Edo State will determine the shape and survival of APC as a political party. “It will show Nigerians, and indeed the world whether APC is a party of truth, change and progress, driven by the principles of fairness, social justice and equity, or if it has become a party that believes and promotes business as usual!” Oyegun declared.

The former Edo State Governor had acknowledged the election timetable released by the Independent National Electoral Commission (INEC) for Edo and Ondo states.
“I welcome the recent announcement by the Independent National Electoral Commission (INEC), indicating the reopening of their offices in Edo and Ondo States in preparation for the forthcoming governorship elections in both states. This is very heartwarming, more so giving the ravaging effect of the COVID-19 pandemic.

“It is also an indication that, whatever the situation during the dates for the said elections, INEC will be prepared for free, fair and crisis-free elections in both states,” Oyegun stated.

The former governor declared: “Our democracy, of course. has no room for imposition. So, the party must accept and also present any member that offer themselves to serve in the positions being occupied by the incumbent governors.

“It is my hope and prayer that a consensus can be built behind the incumbent governor of Edo State for the following reasons:

1. He has not offended against any aspect of the APC’s constitution nor has he, in any way, brought the party to disrepute.

2. He has performed in an exemplary manner. In his time, there has been peace and freedom for the ordinary Edo man and woman from harassment by official thugs. In addition to improving all aspects of infrastructure in the more rural areas of the state, he has significantly impacted on job creation by opening up opportunities for our youths in the rapidly expanding high-tech industry. Also, since the crisis, the Governor’s popularity has grown tremendously, for obvious reasons, and across party lines.

3. Through him, Edo State must prove that our democracy can only survive if we do not create a situation where an individual or a small group can make or unmake our Governors or other elected officials at will.”