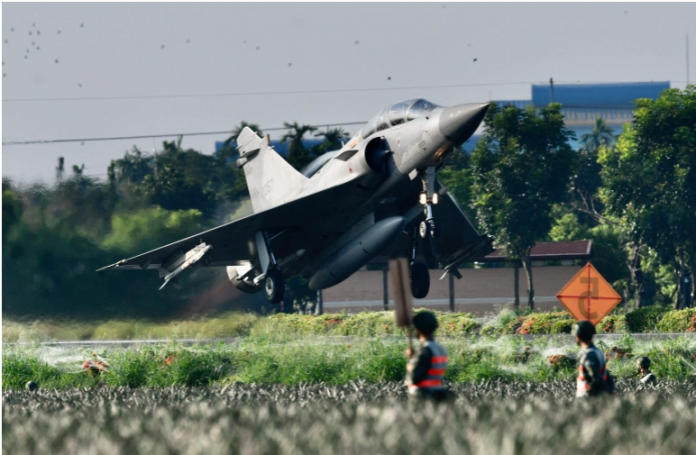 Taiwanese fighter jets landed on a runway on a stretch of highway as the island’s annual military drills reached their peak.

President Tsai Ing-wen, who has promised to modernise Taiwan’s military, watched the display on Wednesday.

China has been ramping up pressure on the self-ruled territory, hoping to force the democratically-elected government to accept Beijing’s sovereignty, including with repeated exercises near Taiwan.

Tsai, re-elected by a landslide last year on a pledge to stand up to China, has said she aims to turn Taiwan’s mainly US-equipped military into a “porcupine”, both highly mobile and hard to attack.

Three fighters – an F-16, a French-made Mirage and a Taiwanese Ching-kuo fighter – plus an E-2 Hawkeye early-warning aircraft landed in rural southern Pingtung county on a stretch of highway especially designed to be straight and flat for rapid conversion from a road into a runway.

“Such splendid combat skills and rapid and real actions come from solid everyday training and also demonstrate the confidence of the Republic of China Air Force in defending its airspace,” Tsai wrote on Facebook, referencing Taiwan’s formal name.

Taiwan has five emergency highway runways across the island, which can be pressed into service in the event of a Chinese attack on its air force bases.

The majority of Taiwan’s air bases are on its flat west coast, facing China, and would probably come under almost immediate heavy missile and aerial bombardment in case of war.

Taiwan’s mountainous east coast is home to two other air bases, with hangers built deep into the rock to provide more solid protection.