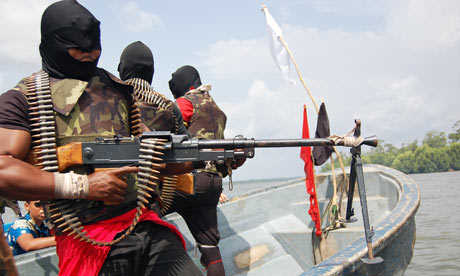 PALPABLE fear has overwhelmed residents of local communities in Bayelsa, Rivers and Delta states where activities of the new dreaded Niger Delta Avengers have been on rise in recent time. Residents of these communities have become apprehensive since news of planned military actions on communities that have links with militant leaders filtered into their respective communities.

In some communities, some residents are already fleeing their homes to avoid being victims of the planned military onslaught in search of the militants and their leaders. The fear of the military has been responsible for the action of some ex-militants leaders to dissociate themselves from the Niger Delta Avengers.

Earlier, Government Ekpemupolo, alias Tompolo, refuted media reports that he is involved in the renewed hostilities in the Niger Delta. Tompolo, unequivocally, disassociated himself from the new militia group, the Niger Delta Avengers, who have claimed responsibility for the damaged Forcados 48-inch export pipeline and other attacks on oil facilities in Delta and Bayelsa states..

Tompolo, in a statement issued by his media adviser and consultant, Paul Bebenimibo, declared that he is not part of the group.

According to the statement, “It is very unfortunate that Tompolo is still being accused of pipeline vandalism despite several press releases he has made denying his involvement in the renewed hostility in the Niger Delta region. Since the declaration of the presidential amnesty program by the late President Yar’Adua in 2009, which he wholeheartedly embraced and accepted, he has sworn not to be part of arm struggles either overtly or covertly.” The statement added:”

Most Nigerians, if not all, are aware of the role Tompolo played in safeguarding crude oil and gas facilities during the last administration, and he is still doing that for the love of country, humanity and out of patriotism. Tompolo is very happy with his achievements through non-violence advocacy since the enthronement of the 2009 presidential amnesty program for the Niger Delta region, particularly, in the coastal areas.”

Moreover, Israel Akpodoro, the National President, National Coalition of Niger Delta Ex-Agitators (NCNDE-A), had in Abuja advised that federal government not to dialogue with militants in the Niger Delta who engaged in the renewed hostilities among which were series of attacks launched by the self acclaimed Niger Delta Avengers and the new ‎Red Egbesu Water Lions.

Akpodoro was responding to calls by an elder statesman, Chief E.K. Clark, counseling President Muhammedu Buhari to dialogue with the new militant groups than adopting military force to crush the boys.

Akpodoro described the attackers of oil pipelines as demagogues and evil doers who are out to foment trouble to stampede the Federal Government into paying them amnesty as he questioned that how many times would the government declare amnesty in the region.

He also said that the call for dialogue by some Ijaw leaders were ploy to arms twist the Federal Government into being cowed by Ijaw youth who he said see Niger Delta as their exclusive preserve.

Akpodoro said that the new militant groups were directly under the command of ‘fugitive’ Government Ekpemupolo, a.k.a. Tompolo, saying those calling for dialogue should produce him to the FG before having the moral rectitude to call for dialogue. Tompolo has since debunked this allegation.

Akpodoro and his group advocated that the federal government should apply maximum military force to “smoke all the recalcitrant” out, insisting that only such military actions can bring permanent peace in the region.

The group declared that it blew up Nembe 1, 2 and 3 gas and crude trunk line that linked Brass and Bonny. The pipelines belonged to Agip and Shell Corporation.

The group also reiterated its threat to carry out an activity that will shock the world.

“Something big is about to happen,” the militants had threatened.

The Avengers has launched several attacks on oil and gas infrastructure since February 2016, demanding a sovereign nation of the Niger Delta people. The group said its aim is to cripple Nigeria’s economy while demanding the secession of the Niger-Delta region.

ALSO SEE: Military presence in the creeks will not deter us — Militants

The Niger Delta Avengers had similarly said that it blew up a deepwater crude pipeline belonging to American oil giant, Chevron, near Abiteye in Warri South-West Local Government Area of Delta State.

The group noted that it carried out the attack in keeping with its warning that the international oil company should not attempt to fix its strategic pipeline at Abitiye area the group had blown up recently.

The renewed attacks also coincided with the Niger Delta Avengers’ ultimatum to oil companies operating in the Niger Delta to stop production and move out of the region.
More so, the militant group said that it successfully carried out the bombing of the pipeline despite the fact that the facility was heavily guarded by military personnel.

The militants protested they were infuriated by talks of the Federal Government offering the region palliatives, including contracts to carry out surveillance of pipelines in the region against vandalism and crude theft.

“The Niger Delta stakeholders’ meeting is an insult to the people of the Niger Delta. What we need is a sovereign state, not pipeline contracts”, they declared.

Service chiefs of the various Armed Forces, at their meeting in Lagos last week declared their preparedness to launch a military onslaught crush the new militants in the Niger Delta.

The activities of the new militant groups have reduced oil exportation drastically and caused decline in revenue accruable to the federal government.