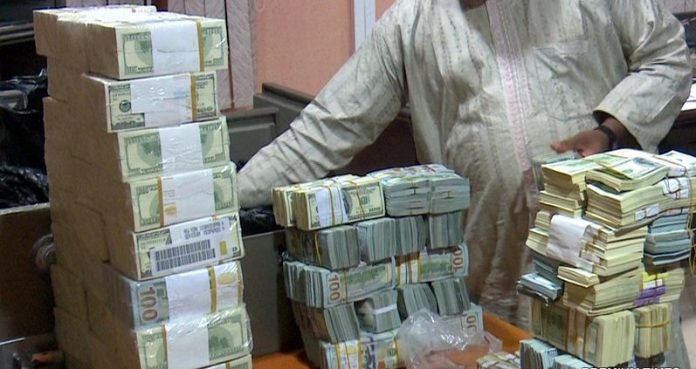 UNBELIEVABLE stockpiles of cash, Nigerian and foreign, enough to rehabilitate all the Federal roads in Nigeria and ensure unfailing power supply nationwide, have been discovered in several parts of Nigeria in recent times. The other day, tonnes of money, all in virgin notes, to which nobody has laid any claim, were discovered at the Kaduna airport; then a larger stockpile of cash, with a yet-to-be identified owner, in Balogun market, Lagos, was discovered.

The only stockpile of cash, stored in a steel house, built purposely to warehouse the mountain of US dollars, was the one allegedly belonging to the former Managing Director of the Nigerian National Petroleum Corporation (NNPC), Mr. Andrew Yakubu. Then, perhaps, the biggest of the stockpiles so far was discovered by the Economic and Financial Crimes Commission (EFCC) in Flat 7B in the Osborne Towers, a luxury residential complex in Ikoyi, Lagos, on Wednesday, April 12, 2017. The awe-inspiring sums discovered in that Flat included $43, 449,947, 27,800 pounds stirling, and N23,218,000, yielding a scoreboard total of N43 billion!

Pronto, the Nigerian Intelligence Agency (NIA) jumped out, kangaroo-like, to claim ownership of this humungous sum of money stacked in a private apartment, according to reports, for upwards of two years. In our opinion, President Muhammadu Buhari has done the right thing, taken the right step in the right direction that is, in suspending the Director-General of the NIA, Mr. Ayo Oke, whose agency has a case to answer, and in raising an investing panel to be headed by the learned Vice-President, Prof. Yemi Osinbajo.

The hasty claim to these moneys by NIA has thrown up numerous nagging questions: first, since when has the N43 billion been stacked in that Flat? Secondly, how many agencies of the Federal Government, particularly the Central Bank of Nigeria (CBN), are aware of this stockpile? Thirdly, if the CBN is the banker to the Federal Government, since when did Flat 7B, Osborne Towers, Ikoyi, Lagos, become a branch of the CBN? Fourthly, what does NIA, an intelligence agency, need all that money for? Fifthly, isn’t NIA’s quick claim to the whopping sum of money a preconceived stratagem, a clever device, to cover up the true owner(s) of the money? Sixthly, what was/were the source/sources of the cash, CBN or some bank(s)? Seventhly, who was the whistle blower?

While the identity of the whistle blower should not be revealed, the Osinbajo investigating panel should discreetly get the whistle blower, in the case of the Ikoyi cash haul, who is not unlikely going to get a percentage of the find, to help in the identification of the owner(s) of the money. That should not take more than one day, and the entire cat would be let out of the bag!

At a time like this, when the country is in agonizing recession, verging on depression, it is disheartening to see endless stockpiles of national and foreign currency notes, of all denominations, belonging to a few thieves whose only aim is to fend for themselves and their immediate families. At a time like this, when several States are unable to pay the salaries of workers, some rogues, with primitive acquisition instincts, steal and stockpile the people’s commonwealth in their private apartments.

We do hope that the Vice-President Osinbajo-led panel will turn out a useful Report revealing the owner of Flat 7B, Osborne Road, Ikoyi, Lagos, and, therefore, the thievish owner of the huge sum of money illegally stacked up in a private apartment. When this is done, we do hope the Federal Government, according to extant laws and in the spirit of the ongoing war against corruption, will teach the culprit a lesson of his life to serve as a deterrent to others of his like.