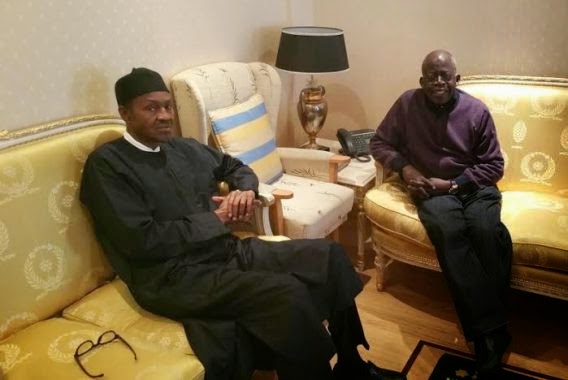 President Muhammadu Buhari on Sunday met behind closed doors with chieftain of the All Progressives Congress (APC), Bola Tinubu, in London.
The president’s Personal Assistant on Social Media, Bashir Ahmad, made this known on his tweeter handle, @BashirAhmad, in Abuja.
The presidential aide posted: “President Muhammadu Buhari receives National leader of our great party, the All Progressives Congress (APC), Asiwaju Bola Tinubu (Jagaba) today in London.’’
Buhari, who is on official visit to London, had on Wednesday met with the Archbishop of Canterbury, Justin Welby, in London where he explained why he declared his intention to run for another term in office.
President Buhari had on April 9, during the National Executive Committee (NEC) meeting of the All Progressives Congress (APC) declared his intention to seek re-election in 2019.
“I declared before leaving home because Nigerians were talking too much about whether I would run or not.
“So, I felt I should break the ice. We have many things to focus on, like security, agriculture, economy, anti-corruption, and many others.
“We needed to concentrate on them, and politics should not be a distraction.
“The majority of Nigerians appreciate what we are doing, and that is why I am re-contesting,’’ President Buhari told the Archbishop.
While in Britain, the president is billed to hold discussions on Nigeria – British relations with Prime Minister Theresa May, prior to the Commonwealth Heads of Government Meetings scheduled for April 18 to 20.
A presidential spokesman, Garba Shehu, had earlier disclosed that: “The President will also meet the Chief Executive Officer of Royal Dutch Plc, Mr Ben van Beurden in connection with Shell and other partners’ plan to invest $15b in Nigeria’s oil industry.
“These investment ventures will lay the foundation for the next 20 years production and domestic gas supply, bringing with it all the attendant benefits both to the economy and the wider society.”
Mr Shehu, who is the president’s Senior Special Assistant on Media and Publicity, said further meetings had also been scheduled for the president to see some prominent British and Nigerians residing in Britain.