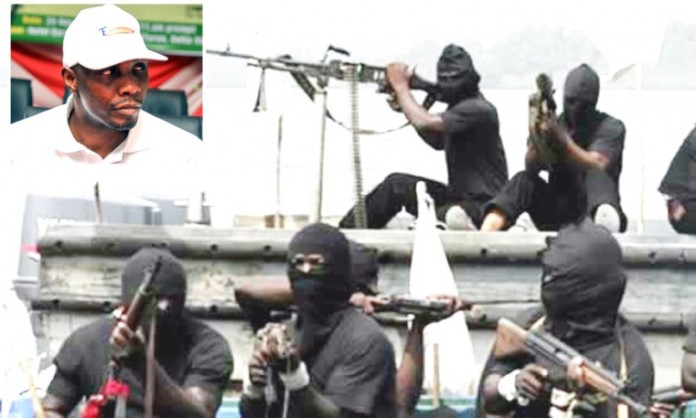 THE activities of the Niger Delta militants could assume new dimension if reports of ex-militants leaders suspending their ‘retirements’ and joining forces with the new groups to resume hostilities in the creeks are confirmed to be valid.

There are indications that former leader of the disbanded Movement for the Emancipation of the Niger Delta (MEND), Government Ekpemupolo, popularly known as Tompolo, has come under intense pressure to rejoin the militant groups in the region. The ex-MEND leader, it was gathered, may return to the battlefield in the Creeks where he is expected to co-ordinate the activities of the various militant groups currently waging economic war against the federal government.

Sources from the troubled zone revealed to National Daily that several of the new militant groups were established by some of the former militant leaders who surrendered at the commencement of the Amnesty Programme initiated by late President Umaru Musa Yar’Adua. The ex-militant leaders were said to have regrouped under the guise of new formations for a new era of violence in the region.

There are indications that more new militant groups will spring up as more ex-militant leaders return to their trade of violence. Some of the former militant leaders alleged to be behind the new groups blowing up oil installations in Delta and Bayelsa states, were said to be considering resuming full violent operations.

Consultations were said to be going on for the return of the former MEND leader to the battlefield. Tompolo was gathered to have indicted to be tired of going into hiding, running from the federal government over his prosecution in court for corruption charges.

Sources revealed that if Tompolo eventually succumbs to the mounting pressure to resume militancy in the region, he will be resume his role as the GENERAL coordinating the various military divisions and their operational camps in the Creeks.

Before this development, Tompolo, had in an open letter to President Muhammadu Buhari, titled “I AM NOT PART OF THE NIGER DELTA AVENGERS GROUP,‎” attempted to exonerate himself from the activities of the Niger Delta Avengers (NDA). He ahd disowned the NDA, assuring the president of safety on the proposed repair works on damaged gas pipelines.

Tompolo had promised protection for the oil servicing company which awarded the contract for repair of the damaged Forcados 48-inch pipeline to go about its job without fear.

This had drawn a battle line between Tompolo and the Niger Delta Avengers who demanded immediate apology.

The NDA had in a statement warned Tompolo against giving false assurances to oil servicing contractors, declaring that his recent show of support to the President Buhari-led Government is provocative.

“With due respect Sir, we the Niger Delta Avengers respect you and all former agitators from the region. We admire your love for the region and all you have done. The Niger Delta Avengers made it clear that we are not part of the Presidential Amnesty program because the program is not genuine. We the Niger Delta Avengers have only decided to pick the struggle up from where you and the former Niger Delta agitators left off; it is only the actors that are new. You are not one of us and you need not border yourself to try to convince anyone. As a result, if you can’t join us, PLEASE take your hands off our activities because it’s a slap on our face for you to give a nod for repair works to continue on the 48-inch pipeline at Forcados despite a stern warning by us for no one to go near the blast site,” the NDA had declared.

They subsequently gave Tompolo three days to apologize. “We hereby give you a three-day ultimatum to apologize to the Niger Delta Avengers in the same national dailies, as anything other than that will mean that we shall bring the war to your doorstep by blowing up all oil installations within your backyard, Gbaramatu Kingdom, since you have taken sides with the federal government to fight the Niger Delta people,” the group vowed.

Tompolo, however, resisted the threats and refused to apologize.

National Daily gathered that Tompolo, in that letter, was trying to subtly gain the favour of the government towards regaining his freedom or having the suit against him dropped. But since that game failed, there was beginning to be a rethink of alternative calculations.

Meanwhile, the Niger Delta Avengers have sustained their attack on oil facilities without restraint. The group last week the group attacked a boat belonging to NNPC.

Military authorities, in a statement, narrated that “During the deliberate attack two soldiers were killed, one wounded, one soldier missing while four civilian staff attached to the house boat were shot dead.”

In their incessant attacks on oil facilities, the NDA had in a statement its spokesperson, Col Agbinibo, stated that failure of Tompolo to apologize to the NDA within the given three days, the strike team of the group on Thursday, May 5, 2016, 4 hit the Nigerian National Petroleum Corporation (NNPC) crude and gas lines.

It was highlighted that “The Crude line feeds the Warri and Kaduna refineries respectively, while the gas line feeds the Lagos and Abuja electricity power supply.

Also, the Niger Delta Avengers strike team 7, on the same Thursday, May 5, 2016, blew up Well D25 in Abiteye. This is a major gas well belonging to Chevron. They further blew up major pipe lines to effectively put the Abiteye, Alero, Dibi, Otunana and Makaraba flow stations that feed the Chevron tank farm out of operation.

The Avengers have crippled the operations of Chevron and reduce Nigeria’s crude oil export.

The Avengers vowed: “Located some 100 meters away from the blasted Nigerian National Petroleum Corporation (NNPC) pipeline is a military houseboat stationed there to protect the oil pipelines. But, we want you public to know that despite the heavy presence of military operatives, our activities cannot be stopped and it just waste of fund and time to let the Nigeria military protect oil installations.”

ALSO SEE: Military presence in the creeks will not deter us — Militants

Taking the youths restiveness to higher level, an aggregate group of militants under the aegis of Joint Niger Delta Liberation Force (JNDLF), had last week, threatened to launch six missiles in the Niger Delta region.

The group had warned that no plane should fly in and out of the country within the period, claiming that the weapons were capable of hitting any object despite its size.

National Daily gathered that when consultations on Tompolo are concluded, he is likely to assume the leadership of the Liberation Force which appears to be a successor of MEND.
Meanwhile, President Muhammadu Buhari last week had a closed door meeting with former President Goodluck Jonathan. The President was gathered to have sought the support of Jonathan to intervene in talking to the Boys to cease hostilities and join in the review of the Amnesty Programme.