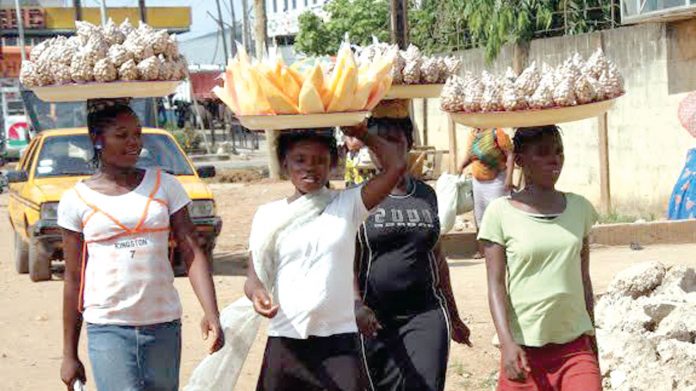 Amaka, a 15-year girl from Katsina Alu in Benue state is just one out of thousands of young girls trafficked from rural communities to urban areas, like Lagos, Ibadan, Port Harcourt, and several other cities   with the promise of a better life, only to be disappointed and forced into child labour.

There are three possible ways children become street hawkers. First, some are trafficked from rural to urban areas for this sole purpose. Second, families that migrate to urban areas for a better life send their children to hawk to supplement their income and lastly, orphans who have no choice but to hawk for survival.

Amaka falls under the first category. When accosted in the Acme area of Lagos, Amaka who spoke in good English, an indication that she used to attend a school, said she was brought to Lagos by a distant cousin who promised her that she would help her complete her education in Lagos.

When asked about her education, she had a sad look on her face. “I am not in school, but I want to go back to school,” she said with a mild smile playing around her face.

The 15-year old girl explained that she is staying with her Aunt who usually sends her out to sell groundnut. “I want to be a nurse when I grow” were Amaka’s words, describing the future she so desires. However, with her current state, it is very unlikely she will see that dream materialise.

She is now part of a horde of under-aged girls who daily crisscross the streets of Lagos hawking boiled groundnuts, chips and other items forced upon them by those who tricked them into coming to Lagos for a better life.

For decades children predominantly from rural communities such as Shaki in Oyo State, many parts of Akwa-Ibom, Cross River, Benue and Kwara States have been recruited by traffickers and trafficked to cities like, Lagos, Abeokuta, Ibadan, Kano, Calabar and Port -Harcourt.

These young girls, on a daily basis, including Sundays hawk groundnut the long distance of Ogba to Ikeja then to Oshodi, Lagos. If Lady Luck shines on them, their trays would have been empty by 8pm when they close for the day and if not, they have to at least sell to a reasonable minimum.

According to Amaka, sometimes some of the girls involve themselves in commercial sex to complete the money they are expected to take home from their sales should they record any unexpected shortage.

The implication of Amaka’s sad story may sound commonplace, but in reality millions of children all over Nigeria are abused, molested, sold like goods, violated, forced to lead immoral lives, kidnapped and killed.

According to findings by National Daily, many of them are not children to some of the owners of the things they sell. These children are usually from remote places that come to Lagos after their parents were promised that they would get a better life in Lagos via quality education. Not knowing that when they get to the city, the reverse will be the case.

Another young girl who gave her name as Blessing, said she has to sell all her groundnuts or else her madam will scold her. “My madam will be angry with me if I go back home with any of the groundnuts that is why I am outside by this time.”

According to her she was still out so late because she must sell a reasonable number of the groundnuts if not all before she could head home.

Investigation also reveals that roadside mechanics, Motor Park touts and security men of companies are the major customers of the female street hawkers. Some of these men also take undue advantage of the desperation of the girls to sell off their items by harassing them sexually.

However, a security man who volunteered to speak with National Daily, Andrew Eze, described how the young girls go about in skimpy dresses in a bid to entice customers.

“I agree that some men are irresponsible and try to take advantage of these kids. These kids aren’t without their own faults,” he added.

But one of the girls denied the accusation. She said some of them are not allowed to buy new clothes, and the one they have has become too short because they have overgrown the cloth and couldn’t afford new ones.

In Nigeria, the number of children hawking on the street is alarming. According to the International Labour Organization, the number of working children under the age of 14 in Nigeria is estimated at 15 million. Several factors are responsible, but the major one is poverty.

Even though the Child Right Act has been part of the laws of the country for a couple of years, children are still seen on the street hawking. About 13 states have not domesticated the law.

While implementation is a challenge in states where it has been domesticated. Section 1 of the Lagos State Street Trading and Illegal Market Prohibition Law 2003, restricts street trading and hawking in the metropolis. But like every other law, it lacks implementation.

These children who hawk by the roadsides usually suffer from fatigue, irregular attendance at school if they were enrolled at all, lack of comprehension and motivation, improper socialisation, exposure to risk of sexual abuse, high likelihood of being involved in crime.

Roadside trading, especially by children of school age, is a negation of the International Convention on the Rights of the Child and also not in accord with the Lagos state social protection services.

Apart from that, such children are denied basic education which is another important right of every child. Many children have sustained lifelong injuries through street trading and hawking.

Moreover, children who engage in hawking or other forms of hard labour may physically bear the marks of this rigour on their bodies before they actually get to adulthood.

Many of them have died as a result of hawking on the highways. With all the environmental menace and insecurity associated with street trading; it is quite obvious that it could birth other social and security problems.

According to Mrs. Adenike Adegbola, founder, House of Grace, an orphanage Itele, a community in Ipaja under Mosan-Okunla LCD, hawking by children is a form of child labour and it contravenes the Child Rights Act which stipulates that children under the age of 18 should not engage in any work that is mentally, physically, socially or morally dangerous and harmful to them, preventing them from going to school.

She explained that her organization has rescued a lot of these children from the streets. “Some of them had ran away from their guardians in Lagos when they couldn’t withstand the torture. And since they came from a distant place and couldn’t go back, they took to the street.”

“We have been able to rescue a lot of these girls. Some of them are back in school, where others are learning one handicraft or the order,” she added.