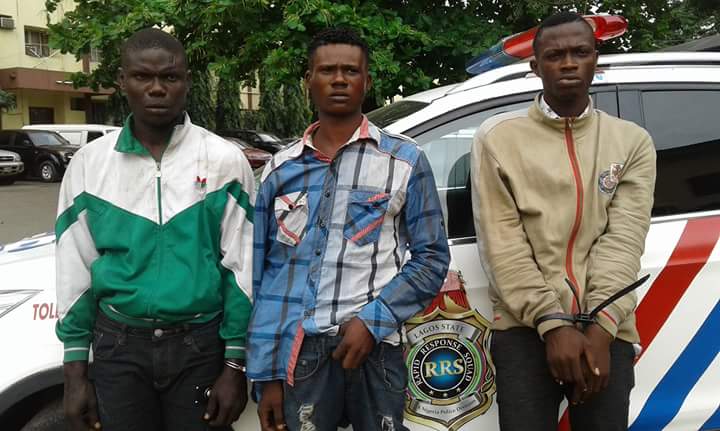 Share this on WhatsApp
Spread the love
Two men who had participated in the ongoing annual Felabration at the New African Shrine in Alausa, Ikeja Business District, have been arrested for armed robbery.
The duo, Moshood Olowu and Olasunkanmi Ogundipe with others said to be on the run, robbed commuters in different parts of Lagos.
National Daily gathered that Olowu and Ogundipe carried robbed people in Ketu and Ojota areas respectively while another suspect, a 22-year-old Rasak Adebola, was arrested by operatives of the Rapid Response Squad (RRS) in a separate incident for bag snatching.
Olowo, 24, and Ogundipe, 26, with two other accomplices but now on the run, were said to have left the New African Shrine and headed towards Ikorodu through Ojota when they committed the crime.
Confessing, Olowu said, “We were at Ojota around 5am after leaving Felabration venue to board a bus to Ikorodu. I dipped my hand into another passenger’s pocket when we were rushing to board the bus.
“I removed his phone and passed it to my colleagues, Ayobami and Jide. The owner held my hand and prevented me from entry the bus.
“Ayobami and Jide, who I gave the stolen phone to, went away while policemen who were passing by arrested me.”
Olajide on his part said he was in the company of nine other accomplices from New African Shrine when they accosted one Pastor Adetayo Samuel, who was waiting to board a bus to Ibadan at Old Toll Gate, Ketu and collected three mobile phones from him and N6, 000.
ALSO SEE: Former super cop launches tax bible for Nigeria
The suspect explained, “We fled the scene immediately and we broke into three groups. We were trailed by RRS patrol team who received complaint from our victim. They arrested me while I was trying to board a bus to Ibafo.”
Meanwhile, the other suspect, Adebola was arrested in Ikate by RRS patrol team after snatching a hang bag belonging to one Helen Susan in traffic in Ikate.
He said, “I was going to Ajah after work, Just before I got to Chisco around Maroko at about 11pm, I snatched a lady’s bag.
“I attempted to escape but the RRS men were in my front, I waited and handed over the bag. I don’t know what came over me. I had only N200 on me.
“I have been waiting for traffic to build up. I have never been imprisoned before. I plead for leniency. I wont repeat it again. I was a motorcycle rider in Shomolu. I came to Ajah to learn carpentry and get serious.”
Confirming the incidents, the State Police Public Relations Officer, ASP Olarinde Famous-Cole, said the three suspects would be transferred to the State Criminal Investigation Department (SCID), Panti, Yaba, for further investigation and prosecution.
Share this on WhatsApp
Related Topics:Armed RobberFelabrationIkeja Business DistrictNew African Shrine in Alausa
Up Next

How beer drove RRS into wild goose chase in Lagos

$1.5bn loot: Why Diezani prefers to be tried in Nigeria