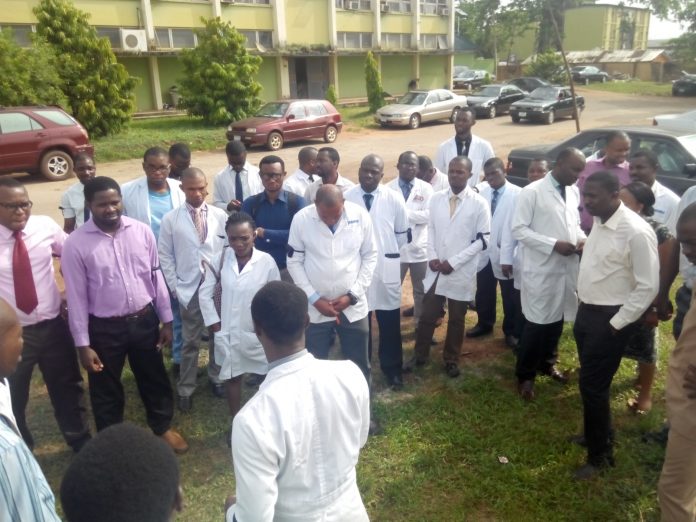 Wearing their white ward coats adorned with black arm bands to register their frustration and protest against the Prof. Micheal Ibadin led administration at the University of Benin Teaching Hospital (UBTH), residents doctors of UBTH stormed the accounts department of the hospital to demand from the department why they have been experiencing  anomalies on their salaries as well as some flagrant discrepancies in their allowances coupled with the new development of not receiving pay slips; a strategy the suspect was being employed to cover the enormous corrupt practices going on in the hospital.

The latest drama which occurred Friday morning, April 7, comes less than two weeks after resident doctors declared a state of emergency in the hospital due to what they called a total decay and dearth of infrastructure and equipment at the hospital, a situation which also saw senior doctors and consultants of the same hospital issuing a 21 day ultimatum to the Chief Medical Director (CMD) Prof. Ibadin, on the same issues last week.

The decision to storm the accounts department was made by the doctors after getting reports that there were some shady dealings going on at the department as employees of the department were allegedly given s instruction by the CMD to deduct over 23 per cent from the salaries of all the resident doctors, medical officers while house officers who had just finished their house jobs were not to be paid. 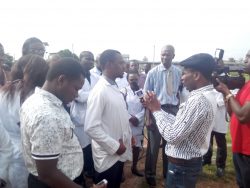 “Since we have been having a running battle with Prof Ibadin, he has taken to unwholesome and fraudulent practices to deny us our pay by deducting sums from our monies without explanation and also refusing to give us pay slips which will enable us ascertain what the deductions are all about,” one of the doctors who did not want his name mentioned said.

According to the Association of Resident Doctors (ARD) UBTH chapter, Dr. Eustace Oseghale, resident doctors in UBTH have declared a state of emergency because of the decaying infrastructure, unavailability of materials to work and poor staff welfare which explained why the health care givers were wearing black arm bands.

At the accounts department, the doctors numbering over 30 trooped to the chief accountants office where they met with the officer in charge and barraged him with inquiries bordering on why their salaries were being held on to; deductions made without explanation and payslips not issued any longer. 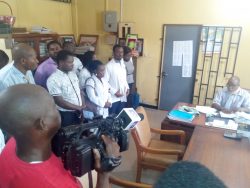 “We have information from the Ministry of Finance that our salaries have been sent to and have been with you   for about two weeks, a particularly angry female doctor asked, “What are they keeping our money for?  And at the end of the day you will pay us percentage when we know the complete money came and they will refuse to provide pay slips to leave us confused”.

The head of accounts who appeared confused at every question responded that all enquiries should be made to the hospital management.

An account staff who pleaded anonymity for fear of his job told the doctors with members of the press around that they were acting under instruction from the management.

“Maybe after the drama they (management) may ask us to start paying that this is what we understand.  You will see in another 10 minutes instruction will come that we should pay,” he said.

Oseghale while speaking to newsmen said the association has issued the hospital management a 21 day ultimatum which lapses on April 18th 2017 failure of which will lead to a total shutdown of the hospital.

“What we are demanding from management includes a responsive action on the shortage of resident doctors to provide services, poor working environment and inadequate welfare for staff.

He went on to reveal that resident doctors in UBTH and some of their teachers are yet to get their 2013 salaries as well as some of their 2016 salaries. 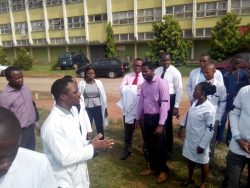 “Our members had to take loan to pay school fees and rent in January and when the January salary came we got a shock shortfall of 28 per cent as we were paid only 72 per cent of our salaries. When we asked about the deduction the management said they remaining balance will be paid along with the February salary without offering an explanation why the deduction was made. They have since 2015 been starving the ARD of her dues which they deduct from source and up till now have refused to pay due ARD dues deducted from our members’ salaries into the ARD account so as to weaken us from speaking truth to power but that has not deterred us,” the president said.

“We wrote to our consultants to intervene in the situation and they (MDCAN) also issued a notice of industrial action to the CMD and enumerated all that we complained about that is wrong with the centre and these include surgeons in UBTH have to struggle with the operating tables during surgery and the equipment in the sterilizing department are often broken down leaving patients, patient relatives and doctors stranded. The accident and emergency is not left out as doctors nurses and patients are often found searching for materials to provide care with the patients having to go out to source materials most times,” he said.

He enumerated some of the problems associated with the hospital since the administration of the present Chief Medical Director (CMD), Prof Michael Ibadin, took over the management of the hospital as being very inimical of the oath of service taken by doctors in the profession.

“The call rooms and post graduate library in the hospital are often in darkness and resident doctors on call have to grapple with insects and reptiles in the dark call rooms. Patient care is not the only suffering sector as staff welfare is so bad. The house officers who just completed their house job are been owed several months of salaries despite been over worked as they were grossly short staffed.

When newsmen attempted to get a response from the CMD, Prof. Ibadin, he shut out the media including the crew of Channels Television, accusing them of having been bribed by the protesting doctors.