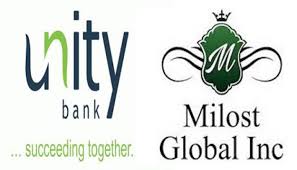 Unity Bank has once again reiterated its position that it had not received $1 billion investment from Milost Global Inc.

The clarification, according to the bank, was in view of misinformation in some sections of the media pertaining the Milost’s interest.

The bank said that no amount of effort would be considered too much in ensuring that the recapitalization program is transparently conducted, urging for calm among the investment community.

It noted that in line with the mandate of its shareholders to engage potential investors to recapitalize the financial institution, the bank was talking to a number of investors and would update the public at the appropriate time.

“We won’t jump the gun. We are operating in a regulated environment and no single investor can pressure it into taking wrong steps” the bank stated.

The bank had in the wake of media reports on the $1bn investment enjoined the public to be weary and clarify any doubtful information with Unity Bank.