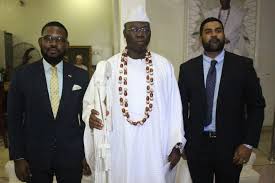 The United States of America (USA) Government delegation held consultative meeting with the Aare Onakakanfo of Yorubaland, Iba Gani Adams, at his residence in Lagos over rising tension and security threats in Nigeria; particularly, threats of insecurity and inter-ethnic conflagrations generated by the RUGA settlements policy of President Muhammadu Buhari.

National Dailylearned that the US delegation which comprised two officials from the US Consul Office in Lagos, headed by the Political Officer, Shashank Iyer, held consultative meeting with Adams on Monday seeking details about the rising threats to inter-ethnic harmony and provoking likely bloodshed in Nigeria.

National Dailyfurther learned that the US delegation was joined the Consulate’s Political Specialist, Arnold Abulime.  Iyer during the meeting explained to Iba Adams and some members of the Aare-in-Council who joined him in receiving them, that the US Government has concerns over the rising tension in Nigeria which has become exacerbated with the Ruga Settlement policy of the All Progressives Congress (APC).

Iyer informed Gani Adams that the US is perturbed about threats to peaceful co-existence of all ethnic nationalities in Nigeria. The leader of the delegation acknowledged that the Consulate discovered that Nigerian people have the capacity to resolve their differences and crises during tough economic periods; decrying that some touchy issues such as Ruga have the tendency to make Nigerians be torn apart.

He, however, indicated the interest of the US to join notable leaders in the country to resolve the threats of inter-ethnic hostilities which could destabilize the country.

“It is tricky getting all to live together, so that is why there is the need to meet and share perspectives.

“We need to be able to move the needle forward together in Nigeria, deal with ethnic issues capable of destabilising the country.

“Nigerians will always find a way around economic issues, but ethnic issues have a way of destabilizing the country,” Iyer declared.

Gani Adams, commending the delegation for the US interest in peace in Nigeria, declared that the solution to all the crises bedevilling the country lies in restructuring the polity.

National Dailylearned that the Aare Onakakanfo of Yorubaland expressed the belief that Nigeria’s problems will be resolved within four years if the President Muhammadu Buhari administration accepts to restructure the country.

“It is not in the world’s interest for Nigeria to go to war.

“The world will be affected.

“With a population of over 200 million, every part of the world will feel the disintegration of Nigeria.

“Most of our problems will be solved in four years once restructuring takes place.

“Our system is going to a state of collapse, especially with the Buhari Government in the last four years.

“And it can only get worse.

“If Buhari does not restructure, it will get worse.

“To save this country, the only way is to accept the report of the Constitutional Conference of 2014 or revert to the 1963 Constitution.

“As it now, no zone is peaceful anymore.

“Even in Katsina, the President’s state, two traditional rulers were kidnapped without trace till today,” Gani Adams declared.

The Aare further acknowledged that the US had assisted Nigeria before now with the restoration of democratic rule in 1999, commending the former US Ambassador to Nigeria, Walter Carrington, for the role he played during the struggle for democratization in Nigeria.

The Defence Minister of the Yoruba nation noted that without such intervention now, a revolution is imminent in Nigeria.

He narrated: “Lessons from Ilorin and Lokoja in the past when the Fulanis came to acquire land for their cattle are imperative.

“They gradually took the place over.

“The same happened in Plateau and Southern Kaduna.

“The history and antecedents of the Fulani do not make it possible for any sane Yoruba man to accept Ruga.”

Aare Adams, thereafter, presented some documents to the US delegation.

Share this on WhatsApp
Related Topics:Aare Ona Kakanfo of YorubalandGani AdamsRuga settlement initiative
Up Next