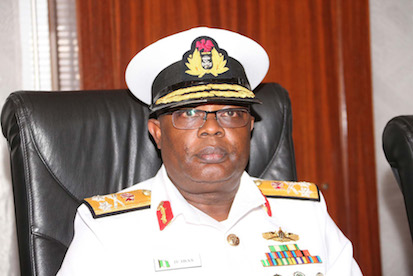 The Chief of Naval Staff (CNS), Vice Admiral Ibok Ette-Ibas, has said the Nigerian Navy has responded to the plea from the Nigerian Police to assist at the rescue operations of the kidnapped students and staff of Turkish International College (NTIC), Ogun State.

He disclosed this on Tuesday during the inauguration of the newly constructed Senior Rates’ Mess, in Apapa, Lagos.

The students and staff were kidnapped by gun men in their dormitory last week.

The CNS explained that the police had on Tuesday said they have located the whereabouts of the kidnappers and their victims, but were experiencing difficulties in accessing it due to the terrain of the creeks.

He said, “The incident that happened is very unfortunate and the armed forces and the navy in particular, have always been very handy to support whenever issues like this occur and we explore whatever options are available.

“The navy has in the past aided the police and it’s sister services in arresting and containing the menace of kidnappers in that area.

“The commanders (navy) are in these area and I am sure they are in touch with various commissioners of police.

“All efforts are on ground to rescue the girls. It’s our responsibility and we will not shy away from it.”

On the Niger Delta crisis, he said the navy will not down its weapon even as the Federal Government is still exploring dialogue with the militants.

He said, “For any crisis, there are always many ways it could be resolved. The Federal Government has stated that it’s open to negotiation.

“But for us in the military, we are taught just one thing- to bring force to bear wherever called upon to achieve our political master’s will. We have been doing that and we will continue to do that.

On the inaugurated senior rates’ mess he said his administration is committed to shelter related, medical service infrastructure, and general welfare of personnel.

He said, “Recall that in June 2016, we were here for the commissioning of shelter related and medical service infrastructure, which included the remodeled command officers’ mess.

“At that time, the landscape of the base was impugned by an old dilapidated building on this location.

“There have been a massive overhaul of NN personnel support structure, through repositioned professional training and in service education, fleet recapitalisation, reactivation and platforms operational sustenance, workplace enhancement, transport service expansion, accommodation decency priority, social utilities delivery, responsive medical cover and the unprecedented boost to recreational infrastructure, as exemplified by this immediate finished product before us.

The commissioned mess is a single floor consisting of 17 well furnished chalets, a dinning area with a well equipped kitchen and mess hall.