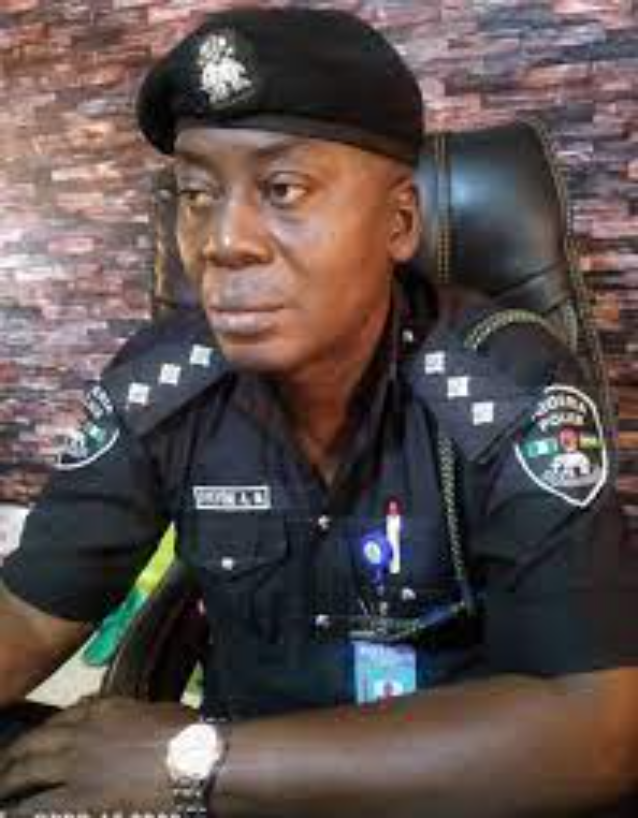 Being a command’s longest-serving image-maker has its ups and downs. SP Abimbola Oyeyemi shares with the National Daily his experience managing crises in a gateway state many consider notorious for ritual killing, incest, and juvenile crimes

Months ago, the CDHR protested the high rate of ritual crimes in the state. Can you confirm whether ritual killings are more rampant in the state?

No. It’s not like ritual killing is more rampant here; it’s because we are getting the suspects arrested, and we are not hiding things from the public. The reason we publish the arrests is to make members of the public learn how not to fall victim of ritual killing. Hardly will you find any violent crime we don’t detect in the state because our men are very proactive. Once we are able to lay our hands on it, we quickly let the public know. That’s why people read more of it from Ogun. But ritual killing is happening everywhere.

One of the suspects in the Oke-Aregba-four killing was acquitted because police investigation cleared him. What exactly did you find out?

You know we met the four boys burning the head of the girl they killed. And we got all of them arrested, and charged to court. Based on the advice of the DPP, one of them was found not culpable, and that was why he was acquitted.

What was the advice?

Based on the report in our casefile, the statements from the four, and those of the other three, it was found the fourth suspect was not involved. But we couldn’t release anyone of them at that level because we don’t have that power. We took them all to court.

You arrest suspected ritual killers. Why don’t you address the other public in the ritual business—the traditionalists?

We have organized a seminar for all of the traditional medicine practitioners in Ogun; they attended in large number, and we gave them certificates of participation. In that seminar, we made them set up a task force to help us fish out non-members perpetrating evils in their midst. The task force has even helped us arrest some of the ritual killers. We have also organized seminars for liquor sellers, for hunters, and even for white garment churches. Many others are inviting us to come and address them too so they can sanitize their associations. We do that from time to time.

You issue advisories regularly. How effective are they—like the recent one in which you warned passengers to demand phone numbers of Okada riders before a ride?

If you want me to take you somewhere in the night, I should ask for your number now as an Okada person. Then I will flash it. If anything happens, that will give the police a lead as to the last person the victim related with. And since we issued that warning, we have not recorded any cold-blooded murder in that axis—Remo.

What about the serial killer you said was on the prowl?

We are still on his trail. We’ll get him.

What’s been your experience handling police image-making in a gateway state like Ogun, which also has the highest number of tertiary institutions?

We have faced a lot of challenges, and we have been able to surmount nearly every one of them. With the cooperation of my leaders, that of my primary constituency (the journalists in the state) and the training by the Force PRO office, we have been able to get a good grasp of the job. Secondly, I didn’t just wake up to become a PRO. I also deputized for somebody for about four years (my boss then is now the Force PRO). So I have gathered enough experience I put to use now. I want to say the journalists in the state have been particularly cooperative.

You said you face a lot of challenges. Would you mention some of them?

You know when something you believe will create a bad image for the police happens, you have to run round to see how you manage that situation without lying, or smearing the image of the force. That’s one. At times some people do something that means a direct slap in the face of the police, and the public fears police reaction. As the PRO, you have to weigh the options, and see how to balance this between you, the police you serve, and the public. But with the help of the journalists in the state, we manage all these well.

As a linguist who’s been in the police since 1999, you’ve witnessed eras and patterns of communication. So, comparing these, how has police image-making evolved?

In the past, if the police wanted to reach out to the public, it was usually through bulletins, or they went to radio or TV stations. Nowadays, I can be in my office and communicate to the whole world. I can tweet or post on Facebook, and thousands will read it within minutes. This era of social media is definitely different. But in that past fake news was not rampant. Now the advent of android phones has made many become emergency journalists—people who know nothing of the ethics of journalism. They feed the public with fake news—news that will make the whole command run helter-skelter sometimes. Let me give you an example. Early one morning in 2018, people started calling my phone from different parts of the country. They said they saw a video of herdsmen killing people along the Sagamu-Ijebu Ode road. By the time I got to work, my CP then, Hammed Illyasu, asked if I had got the news. We called the area commanders of those places. Thy moved round the stretch of that road. There was nothing like killing. We later realized it was a video of an accident that happened in 2010, and somebody reposted it in 2018. People will just sit down in their rooms and make videos of fake killings, and post them. The funniest thing is by the time you now tell members of the public what they read or watch is fake, people won’t listen to you. They already have something to believe. You can see what we go through nowadays is far more serious than it was in the past.

Have you found a way around this?

Yes. The only solution is to look for the purveyors of fake news, and take them to court. Feeding the public with lies is even a crime.

We had somebody from Obalende in Ijebu Ode who posted on social media he saw 15 Boko Haram terrorists armed with AK 47 at Imosan. We traced and got him arrested. Then he said he was just catching fun, but we had to charge him to court.

Incest, too, pops up frequently in Ogun. The worst lately was the man sleeping with his daughter, and pimping her.  What’s your command’s gender unit doing about the crime?

Well, there is nothing we can do to prevent it. The only thing we do is sensitize members of the public.  We make parents know why they should not leave their girl-children in care of one brother or uncle somewhere. We even tell mothers if they observe their daughters are becoming too intimate with their fathers, the mothers should be watchful. Another thing we do is let parents know that compromising the cases during prosecution emboldens the perpetrators. You see parents like to frustrate the police efforts. It’s then they will come back and say they don’t want their children exposed, forgetting this kind of matter is not tried in an open court. The families of the suspects sometime induce the victim’s parents with money. You see them coming back to say they just realize the suspect is their brother.

A Yahoo Boy’s girlfriend was barking and stripping recently. Your command was angry with those who posted her video online. How far about the case?

The suspect in that case has been charged to court. The lady,too, has been taken to hospital, and has come over her trauma. And those who shared the video have been sanctioned.

What did you charge the boyfriend with?

There are a lot such person can be charged with. But I can’t remember the actual charge except I call for the investigation team to furnish me with the details in the casefile.

How about that spirit moving round Ibeto, Ketu, and other Ogun communities at night, killing whoever answered the door. Its news was all over Whatsapp platforms then.

That was just the imagination of those spreading it. Does a spirit have to knock at your door before it enters your room? Or what do you call a spirit? A spirit you hear knocking at your door is no longer a spirit. We don’t believe that.

You didn’t bother investigating the claim?

No. Spirits are not meant to be investigated

If anybody knocks at your door in the middle of the night, and enters, call us. But a spirit—there is no way we can investigate a spirit. It’s hard to believe.

Before the NANS protest turned into another ENDSARS: Is there hope on the horizon?