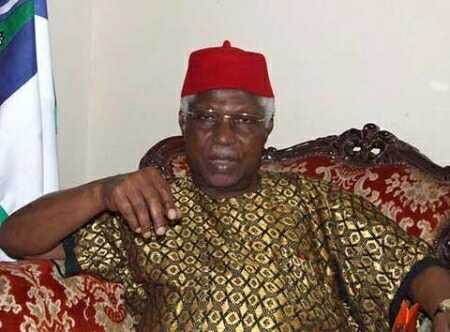 Share this on WhatsApp
Spread the love
Minister of Labour and Employment, Chris Ngige has revealed how President Muhammadu Buhari has been expending so much to give the late former Vice President Alex Ekwueme a befitting burial.
Ngige spoke on Sunday at Ekwueme’s hometown in Oko, Orumba North Local Government Area of Anambra State after inspecting facilities for the burial of the late VP.
According to the minister,  Buhari has committed about N1bn on Ekwueme so far, from the day the ederal government took over his medical bills to date.
Giving the breakdown, he said  the cost of road rehabilitation alone in Anambra and neighbouring communities of Imo and Abia states in preparation for Ekwueme’s burial stands at N480m.
“If he [Buhari] doesn’t come for the burial himself, I’m sure the Vice President, Prof. Yemi Osinbajo, will be here for the burial as a matter of right,” said Ngige.
“So, I’m here to inspect the facilities in preparation for his burial; and I can tell you that I’m satisfied with the progress of work.”
He noted that the Federal Government is building the mausoleum, which will contain a modern library and other facilities.
“And I also know the cost of that too.
“And remember that the Federal Government took up all the medical bills of flying him abroad and bringing him back to Nigeria from London upon his death.
“The cost of hiring an air ambulance is not a joke. So, Buhari has honoured this Igbo son in all ramifications.
ALSO SEE: Linking me to Obasanjo’s third term bid was inconsiderate – Aiteo boss
“He has committed not less than a billion naira in this project because he is passionate about it,” Ngige stated.
The Federal Government was considering naming a national monument after Ekwueme to immortalise him.
Share this on WhatsApp
Related Topics:burialChris Ngigelate former Vice President Alex EkwuemeMinister of Labour and EmploymentPresident Muhammadu Buhari
Up Next