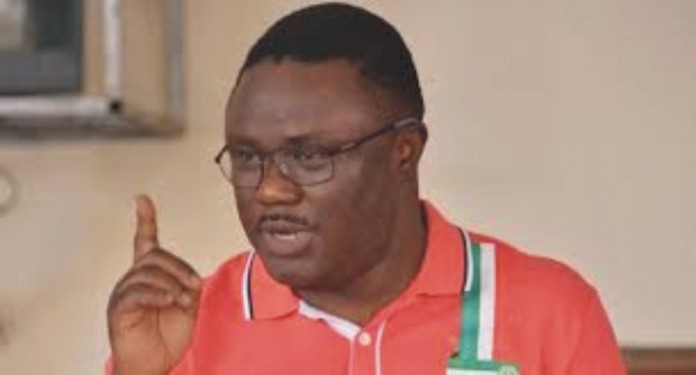 Cross River Governor Ben Ayade yesterday stunned the organised labour in the state when he announced the payment of salaries for the month of May on the first day of the month.

A mild drama immediately ensued when the workers who were at the U.J. Esuene Stadium for the May Day celebration each began to receive salary payment alert from their various banks.

Unable to contain the excitement, shouts of ‘Alert! Alert! Alert! rent the stadium as the workers went into a frenzy, singing the praises of the governor.

Before now, the governor had paid salaries between the 13th and 20th day of each month.

Ayade told the workers, who named him the Best Labour Friendly Governor in Nigeria, that his administration has a duty to give workers in the state a sense of dignity.

“We must create opportunities for labour to feel a sense of dignity. If you are truly a Christian, you must know that as you care for your kids, you must care for labour,” he stated.

He said no infrastructure is more important than labour. “That is why in all my programs, I focus on people.”

Urging Labour to keep faith with his administration as they work in harmony to foster the growth of the state, the governor declared that no worker who has dully put in his honest labour will go unrewarded.

He reasoned that anybody who pulls down labour does not understand the philosophy of existentialism, hence the need for labour to come before infrastructure and skyscrapers.

Other packages the governor announced were the donation of a new Toyota coaster bus for labour, release of funds for the building of Labour house as well as the appointment of labour representative into the state executive council.

Earlier, the organised labour, through chairman of the Nigerian Labour Congress (NLC), Comrade John Ushie, had lent its support to the construction of the 260km superhighway as well as other projects aimed at repositioning the economy of the state.

Ushie also urged government to intervene in a number of areas, including the state newspaper corporation, which he said is in a dilapidated state.