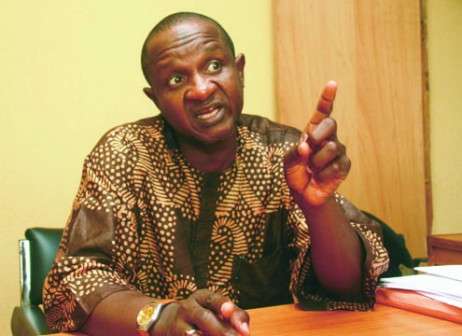 The Academic Staff Union of Universities (ASUU) on Tuesday disclosed that the 2016 budget presented by President Muhammadu Buhari is a ‘big failure’ in several areas as it fails to meet the numerous challenges confronting the Nigerian economy.

ASUU President, Dr. Nasir Isa, who disclosed this in Abuja while briefing newsmen on various national issues, argued that the 2016 appropriation bill is a step backward to the days of ‘debt trap’ syndrome, insisting that it fell short of the expectations of citizens in various dimensions.

According to him, “the budget does not address the issues of the violation of the Nigerian Constitution on the privatisation of the commanding heights of the economy.

“Failing to do this leaves the very basic problem of national economic development untouched as well as the very source of the corruption that destroyed the Nigerian economy.

“We do not see a new alternative strategy for development. The 2016 budget risks returning Nigeria to the ‘debt trap’. In order to fund recurrent expenditures, the government will have to go borrowing. It is worrisome that the International Monetary Fund (IMF) and the World Bank are already courting, praising and toasting the new government in Nigeria.

“President Buhari has said Nigeria will not go borrowing, whereas the Minister of Finance has been consistently affirming that we have to borrow in order to fund the 2016 budget.”

The university lecturer stated that given the prevailing economic situation in the country, it would be wrong to support the government’s decision to borrow in order to fund the budget.

“We therefore oppose the borrowing option. The N2. 2 billion recovered from the Treasury Single Account (TSA) and whatever else is recovered from looters should be ploughed back to finance the 2016 budget,” they stated.

As regards the purported padding controversy that has dogged the 2016 budget, the ASUU president expressed great concern on similar cases with the education budget, stressing that “The 2016 budget allocated to education amounts to 8 per cent of the total budget.

“This goes contrary to our agreement with government to progressively increase the budgetary allocation to education to 26 per cent by UNESCO.

“The poor allocation to education contradicts the intent of government to give higher education to students of science and technology at the tertiary level.

“Contrary to this position, the 2016 budget is not in favour of the Federal Government Secondary Schools. The cumulative capital appropriated to federal secondary schools was over 230 per cent higher than that of tertiary institutions put together.”

The unions expressed surprise that “a total of 34 out of 39 federal universities were allocated the same capital vote of N53.7 million irrespective of their vary needs. And the sum of N549 million was allocated for procurement of computers by the Federal Ministry of Education.

“N1.255 billion was allocated to procure utility vehicles; N273 million for maintenance of ministry website, and over N1. 9 billion to acquire quality assurance offices; N430 million and N920 million were voted for research and development of for ministry headquarters in Abuja as well as the National Teachers Institute (NTI) respectively. None of the universities were allocated a single kobo.

“The total capital appropriation of each of the federal ministry of education headquarters and 19 federal secondary schools is more than the capital vote of the 39 federal universities, 24 polytechnics and 21 Colleges of Education put together. Similarly, the capital appropriation to Mass Literacy Agency was approximately equal to that of the 39 universities,” ASUU stated.

The university lecturer went on to reject the implementation of the TSA by the Buhari government to checkmate corrupt practices; noting that the innovation is rather constituting a clog in the wheel of progress in federal universities across the country.

According to Isah, “With the operation of TSA, federal universities find it extremely difficult to discharge their core responsibilities of teaching, researching and community services as well as engaging in international academic networking due to inadequate access to budgeted funds.

“The TSA funds belonging to universities and other government agencies are domiciled with the Central Bank of Nigeria (CBN) in a single account from where universities are to make request for same whenever the need arises.”

He contended that “in view of the dynamic nature of universities and fluidity of their programmes, the accounting system creates bottlenecks, undermines university autonomy and makes it extremely difficult for universities to fund ongoing researches and sustain international networks.

“It makes it difficult to buy equipment and consumables for laboratories. The universities run municipal services and several other activities that would be difficult to sustain under the TSA.

“On account of TSA, federal universities have experienced shortfalls in their personnel cost in the months of December 2015 and January 2016, and this has caused serious delays in the payment of salaries for the same period, causing suffering for the families of workers who had earned their pay through their work.

“ASUU therefore rejects entirely the practice of shortfalls in personnel costs and will be compelled to take appropriate steps against it if this is not checked on time.”

Share this on WhatsApp
Related Topics:2016 BudgetASUUDr. Nasir IsaPresident Muhammadu Buhari
Up Next