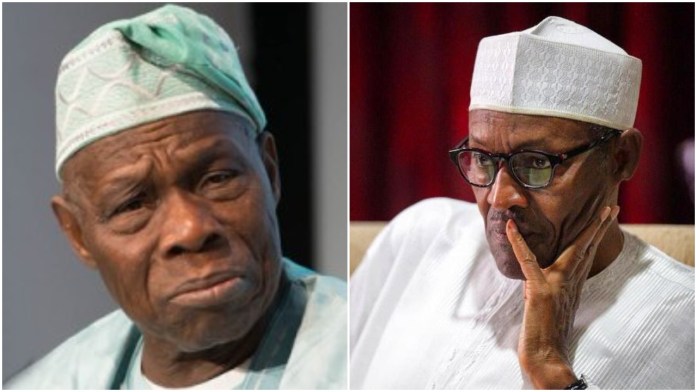 Share this on WhatsApp
Spread the love
Former President Olusegun Obasanjo is currently holding a meeting with prominent Yoruba leaders in what was believed to be part of moves to forge a common front with the Yoruba leaders ahead of the 2019 presidential election.
National Daily gathered that the meeting holding at the house of a prominent Yoruba leader and Afenifere chieftain, Pa Ayo Adebanjo in Lagos has in attendance other leaders of the pan – Yoruba socio- cultural organization.
Other prominent Yoruba leaders at the meeting included Prof. Akin Mabogunje, Mrs. Awolowo Dosumu, Pastor Tunde Bakare, Supo Shonibare and Yinka Odumakin.
Others are Otunba Gbenga Daniel, and Olusegun Mimiko, former Ogun and Ondo state governors respectively.
The former president has in recent times been at loggerhead with President Muhammadu Buhari since he wrote a letter asking Buhari not to seek re-election in 2019.
His Coalition of Nigeria Movement (CNM) merged with the African Democratic Congress, ADC, in May, describing the new platform as a new page in Nigeria’s political history.
“Some of us must hold ourselves as watchmen and watchwomen for the nation without necessarily belonging to any political party as genuinely concerned and interested citizens and statesmen and stateswomen beyond the ambition of office and enticement of grandeur of position or fortune,” Obasanjo was quoted to have said during the announcement of the merger.
Obasanjo had recently cried out that President Buhari was plotting to use fake documents to implicate him and lock him up in jail for fraud.
While APC lawmakers were in support of President Buhari and insisted that the allegation was untrue, their PDP counterparts insisted that Obasanjo’s allegation should be taken seriously and investigated.
Meanwhile, Professor Wole Soyinka has said that Obasanjo is not the right person to lead any movement for reform on change of leadership in the country in 2019, adding that Obasanjo’s Coalition for Nigerian Movement should not be glorified.
According to Soyinka, Obasanjo and other geriatric leaders of his generation should step aside and allow a new generation to lead the nation.
Soyinka said he will launch a publication to expose him on July 3 at Freedom Park in Lagos Nobel laureate,

“Obasanjo has crossed the red line and I will launch a publication to expose him on July 3 at Freedom Park in Lagos,” Soyinka was quoted to have said.  “He is trying to hijack a recovery process he is least worthy to lead.”

Obasanjo under pressure to back Atiku for 2019