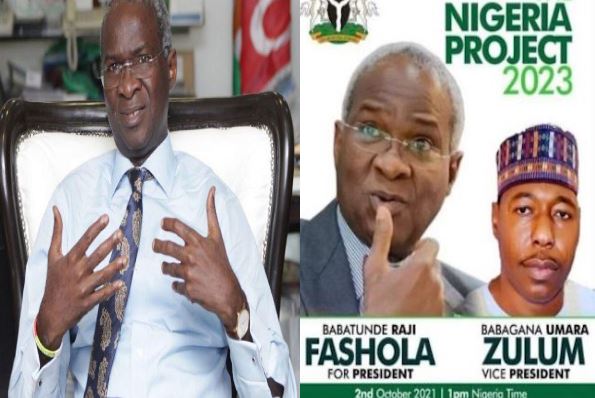 The groups are projecting Fashola and Governor Zulum for the Presidential and Vice-Presidential tickets ‘of their political party’. They are being printed on a poster being circulated on social media at the weekend.

The Special Adviser to the Minister on Communication, Hakeem Bello, in a statement in Abuja, noted that normally, the poster and the multiple social media reports that were almost immediately created on its account would have been dismissed as the work of trolls. He stated that, however, the caution was necessary because of two major factors.

According to Hakeem Bello, the first was to respond emphatically ‘no’ to several enquiries from well-intentioned Nigerians seeking to know if the Minister had been contacted or if the Groups had his permission to send out the invitation.

He stated that “no individual or group has approached the Minister for or on behalf of The Nigeria Project 2023 without equivocation.

“As Honorable Minister, Mr. Fashola is currently focused on leading his dedicated Team in the Ministry of Works and Housing to fulfill President Muhammadu Buhari’s mandate for expanded and upgraded road transport infrastructure as well as affordable housing across the country in order to achieve economic growth and prosperity for Nigerians.”

The Special Adviser further explained that, secondly, entities that are not affiliated with a political party are unable to nominate candidates on its behalf. He said that the people and organisations described as promoters of The Nigeria Project 2023 are unknown to the APC and the Minister, who is a high-ranking and devoted member of the ruling All Progressives Congress (APC).

“In light of the foregoing, the Minister of Works and Housing, Babatunde Fashola SAN, cautions members of the public to be vigilant of unsolicited people and Support Groups whose true motives are still unknown.

“Every conceivable support should be given to the current administration’s efforts to deliver a better nation for all under President Muhammadu Buhari’s leadership,” Hakeem Bello declared.