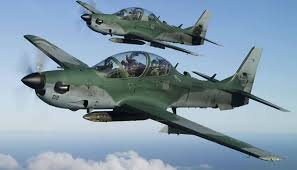 Following the Tuesday joint military onslaught on hoodlums hiding inside forests at Essien Udim LGA of Akwa Ibom, many people have been reported killed in the aerial attack in Ntak Ikot Akpan.

As of Tuesday, no casualty figure was forth-coming  after the four-hour blitz, the National Daily earlier reported.

But the Nigerian Army said on Wednesday that those killed during the military operation were ‘hoodlums.’

“The operation was successfully executed and resulted in the dislodgment of the criminals while fleeing hoodlums were neutralised by the Air Component,” the army spokesperson, Mohammed Yerima, a brigadier general, said in a statement.

Yerima said people can now go about safely in the area.

Policemen and other security agents have come under attack by these hoodlum in the area. Some police officers were killed recently while others were abducted.

“Whereas the remote and immediate causes of these unprovoked attacks are unknown, a discreet investigation is on the way to unravel the same and seek a lasting solution,” police authorities said.