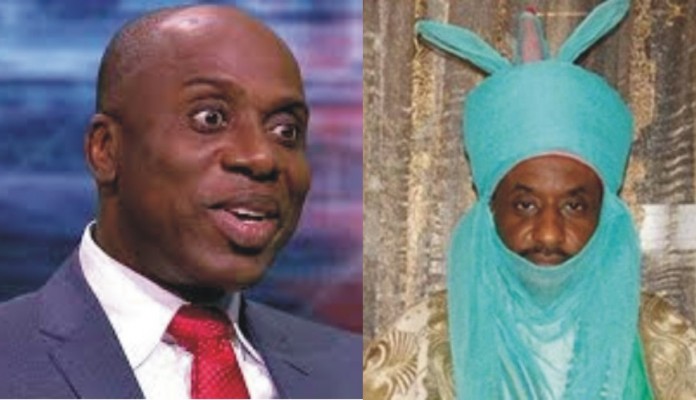 Amaechi, now transport minister, responded Thursday to Sanusi’s statement that it was the Rivers former governor that made the letter (detailing $49 billion missing oil money) available to former President Olusegun Obasanjo who then wrote an open letter to his godson Jonathan in 2013.

According to Amaechi, it was a concerned Nigerian that handed him a copy of the letter as chairman of the Nigeria Governors Forum then, and he confirmed from Sanusi before sharing it with then Sen. Bukola Saraki and other governors.

“Amaechi made it abundantly clear to the then CBN governor that looting of the nation had to be stopped, and that all non-remitted funds should be remitted,” a statement from Amaechi’s media office said Thursday. “And Amaechi was going to use the letter to do whatever was in the best interest of the nation and Nigerians.”

But Amaechi’s idea didn’t wash with Sanusi who eventually took the fall when Jonathan ordered him to resign.

Before then, Amaechi had been having a run-in with Jonathan over a wide range of issues, including the succession battle in Rivers, and first lady Patience undercutting the governor in his state. The former governor had already defected to the APC then.

Opportunity, however, came for Amaechi to tip the envelop when a delegation from the U.S Defense Office came telling him Nigeria lost $7 billion yearly to oil theft—one of the major contents of Sanusi’s letter to Jonathan.

“That was how the CBN governor’s letter to former President Jonathan came up,” the statement noted.

“In the presence of journalists covering the visit, Amaechi brought out the Sanusi’s letter and allowed the visiting American delegation to buttress the point that Nigeria was losing money to non-remittance of proceeds from oil sales into the Federation Account.”

Sanusi, a free-speaking critic of the government he served, was on official visit to a neighbouring country when Jonathan announced the CBN governor sack, and the DSS swung into action to arrest him.

It was the APC stalwarts that rallied round him when he detoured to Lagos—to beat the waiting state police in Abuja.