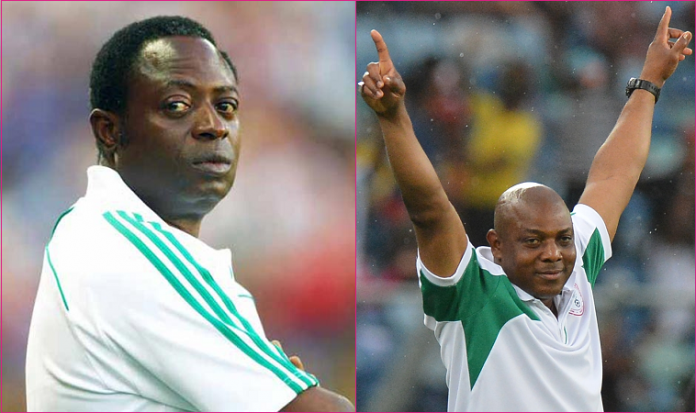 SUPER Eagles team doctor Ibrahim Gyaran as termed the disease that claimed the lives of former Super Eagles coaches Amodu Shuaibu and Stephen Keshi as silent killers. He told National Daily Sports that Nigerians should take their health routine checkup seriously. The sad news of the technical director of the Nigerian Football Federation (NFF), and former coach of the Super Eagles, Shuaibu Amodu, was announced in the early hours of Saturday June 11, 2016. Mr. Amodu, a four-time coach of the national team, died on Friday night shortly after complaining of chest pain, the NFF said in a post on its Twitter handle.

According to report, he died in an undisclosed hospital whilst his body was deposited at the famous Stella Obasanjo mortuary.

Governor Adams Oshiomhole of Edo State has described the death of Stephen Okechukwu Keshi, former Captain and Coach of the Super Eagles as a great loss to the nation and to Edo State where he was resident.

The Governor, in a statement signed by his Chief Press Secretary, Mr. Peter Okhiria, described the late Stephen Keshi, fondly called the ‘Big Boss’, as a thoroughbred professional, complete gentleman, a good citizen who impacted positively on his immediate environment where he lived a quiet life.

Oshiomhole said: “On behalf of the Government and People of Edo State, I join millions of Nigerians and other sports lovers worldwide to condole with my brother, the Governor of Delta State, Dr. Ifeanyi Okowa, on the sudden death of this illustrious son of the state.

“He was a thoroughbred professional, a complete gentleman and a good citizen of Edo State where he lived quietly and peaceably with his neighbours before he gave in to the cold hands of death. His death is most painful not only to football lovers but to those whose lives he impacted positively.

“While we mourn Keshi, we celebrate his many contributions in bringing joy to millions of homes across the nation and the world with his football skills which were honed during his days as a player with the defunct New Nigerian Bank (NNB) of Benin.

“His name will undoubtedly be written in gold as a great Nigerian Ambassador who brought glory to the country and left an indelible mark in the sands of time.

“I pray that the Almighty God will grant his soul eternal rest and his family the fortitude to bear this great loss.”