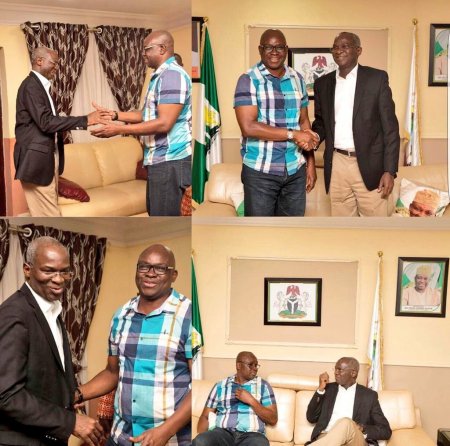 Share this on WhatsApp
Spread the love
Governor Ayodele Fayose of Ekiti State has expressed confidence in the commitment made by the Federal Government to fix some of the roads linking Ekiti to other states.
The governor while receiving the Minister of Power, Works and Housing, Babatunde Raji Fashola, in the State Government House, commended the Minister for taking time to travel by road in order to assess the roads.
Fayose noted that if such decisive steps had been taken earlier enough, there would have been more infrastructural developments in the state.
He called on the Minister to ensure the roads are fixed as promised and speedily too, as he also solicited for repayment of costs incurred on Federal roads by the State government.
The governor promised to channel whatever funds recovered from the Federal Government to roads in other communities of the state.
Earlier, the Minister said engineering designs have been completed on the Ado-Igede-Aramoko-Itawure and Ado-Akure roads and contractors are expected to move to sites as soon as the 2017 budget is passed.
Fashola, who arrived around 1am by road from Abuja, said he had first hand assessment of some of the roads on his way to the government house and assured that appropriate actions will be taken to fix some of them.
He promised the readiness of the Buhari administration to help the states, noting that ‘the Federal Government is committed to redeeming the expenses incurred by state governments on the Federal roads’.
He commended the State government for being proactive in fixing some of the roads.
The Minister was later conducted round some projects, including the ongoing flyover, the Ado-Ifaki road and the Ado-Ikere road among others by the governor in the early hours of Thursday.
Share this on WhatsApp
Related Topics:Babatunde Raji FasholaEkiti State Govt.Governor Ayodele FayoseMinister of PowerWorks and Housing
Up Next