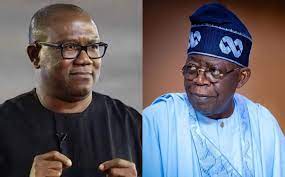 The All Progressives Congress (APC) on Tuesday attacked the presidential candidate of the Labour Party (LP), Peter obi, saying that his manifesto offers nothing new to Nigerians but “fallacies and false statistics”.
The Director of Media and Publicity of the APC Presidential Campaign Council (PCC), Bayo Onanuga, in a statement on Tuesday, chided Obi, saying that his manifesto is a poor imitation of the programmes of the APC administration under the leadership of President Muhammadu Buhari.
Onanuga, in the statement, responding to Obi’s 62-page manifesto, tagged ‘It is Possible: Our Pact with Nigerians’, focused on seven thematic areas: security, production, institutional reforms, the industrial revolution, infrastructural development, human capital development, and robust foreign policy, declared: “After perusing the document which is very high on graphics and demagogic rhetorics and short on substance, we have come to the conclusion that the document is empty and vacuous.
“The document …offers nothing refreshing to Nigerians and comes across as total anti-climax. The subtitle ‘Action Plan’ was shamelessly parroted from Asiwaju Bola Tinubu’s manifesto.
“As expected, Obi’s document contains fallacies and false statistics.
“Obi claimed China moved 740 million people out of poverty. He understated the achievement and was silent about the period it took the Chinese Communist party to achieve this. China moved close to 800 million people out of poverty and it was achieved in 40 years. This makes the present APC government’s plan to move 100 million of Nigerians out of poverty in 10 years, more realistic than Obi’s rhetoric tends to suggest.
“One of the fallacies contained in the document, which Obi has often repeated to his followers, is that Nigeria is a failed state. We wonder whether the Labour Party candidate sometimes bothers to check the meaning of a failed state and whether the country he dreams to govern falls into the mould of Yemen or Somalia, where institutions of government have lost total control of their societies.”
Onanuga stated that Obi’s policy document exposed him as “ill-prepared for the titanic task of governing a country the size of Nigeria”.

Not true that Sammie Okposo slumped, manager opens up