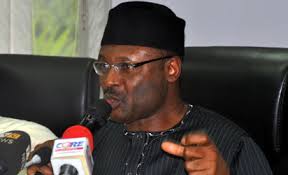 Share this on WhatsApp
Spread the love
It is doubtul if INEC boss, Professor Mahmood Yakubu, would have had a rest of mind since last weekend. What with the torrents of barbs that greeted the last-minute shifting of the February 16 presidential polls to February 23.

Naturally, various conspiracy theories have since mushroomed with some either suggesting he is APC’s agent or PDP’s mole.
True, keeping the nation in the dark over the much-awaited polls till the eleventh hour is condemnable. But beyond that, it would appear nation is only back to a familiar sport – shopping for scape-goat for a crisis long foretold.
While it is now politically correct to abuse Yakubu, no one will addresss the odds INEC faced all along. Funds were released to the commission less than two months to the elections. Had the cash been received as and when due, perhaps the electoral umpire would have been able to mobilize printers and contractors on time and the materials delivered ahead of time.
In fact, a reliable source told me a cargo plane bearing some of the vital documents from Belgium only landed Abuja in the early hours of February 16!
The challenge is Herculean indeed. Overall, apart from the presidency being contested by record 72 candidates, also up for grabs are seats in 1,558 National, State as well as Local Constituencies in the Federal Capital Territory (Abuja). Over 84 million voters are expected, the highest in the nation’s histrory.
Another issue is the necessity to unbundle INEC. Going forward, it surely will be helpful to set in motion the process to streamline its functions after this general election. Given the nation’s exponential growth, sticking to the old template of election administration will only result in the kind of embarrassment of last weekend. For more efficiency, INEC should be reconfigured in a way that enables it focus essentially on its core manadate: conduct of election.
To this end, three successor agencies have been proposed. The first should cater for registration and regulation of parties, the second for electoral offences and the third for constituency delimitation commission.
Proposal for this has long been prepared. What remains is the political will to execute. For instance, part of the reforms is the formulation of legal ceiling that ensures that disputes arising from elections are dispensed with before the inauguration of the new dispensation. This is to ensure litigations don’t last forever or give custodian of a disputed mandate the unfair advantage of using public funds to fight their legal battle.