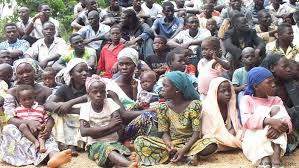 The Federal Government has been urged to include Taraba State as one of the benefitting states in the rehabilitation and resettlement of Internally Displaced Persons (IDPs) in the North East.

The Catholic Bishop of Jalingo, Most Rev. Charles Hammawa, made the appeal on Monday in Jalingo at the 2016 interdenominational church service organised by the Christian Association of Nigeria (CAN).

According to him, Taraba like Adamawa, Borno and Yobe states were badly affected by the Boko Haram crisis between 2013 and 2015, leading to loss of lives and properties worth millions of naira.

The cleric said that killings were still going on in Bali and Gassol Local Government Areas of the state.

“The Catholic Church has been badly affected, seven of our parishes were destroyed and over 3,000 out stations burnt during the crisis.

“The church has reached out to the people affected by the crisis, by providing food stuffs, shelters and other things to alleviate their suffering.

“But the church and the state government cannot do it alone,” Hammawa said.

The bishop, therefore, appealed to the Federal Government’s Committee on Rehabilitation of the North East affected by Boko Haram insurgency to include the state in the rehabilitation programme.

Hammawa urged the state government to focus on peaceful coexistence, noting that Wukari, Ibi, Donga, Gassol, Bali, Takum and Gashaka local governments of the state were badly affected by the three-year-old crisis.

He also called on traditional rulers of Gassol and Bali to put in more efforts in ending killings in their domains.

The bishop called for peaceful coexistence among diverse religious, ethnic and political groups in the state.

In his remarks, Gov Darius Ishaku commended the church on its efforts at restoring peace to the affected communities in the state.

Minister denies calls for submission of CVs to Labour ministry