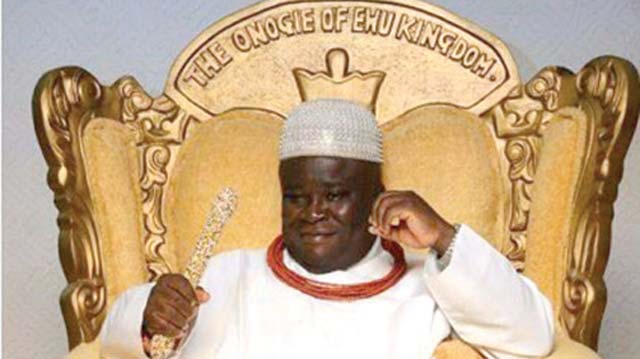 The Onojie of Ewu, His Royal Highness, Abdul Rasak Ojeifo, Isesele II, in Esan Central Local Government Area, Edo State has been kidnapped by unknown persons. The Edo traditional ruler was kidnapped in the company of his wife, driver and one other person who was in their entourage to Benin City.

The Onojie of Ewu, left his Palace for Benin City on Thursday and his whereabouts has remained unknown since he departed the Ewu kingdom.

The traditional ruler was expected to have called his family back home or his close chiefs on his arrival in Benin City or ought to have returned home, but there has been no news about him since yesterday.

Efforts to reach the traditional ruler in Benin City or trace his whereabouts by his relations or council of chiefs have been unsuccessful. However, the news broke out this Friday afternoon that the traditional ruler had been kidnapped by unknown persons, forcing the police to commence immediate search within Edo State.

Though the Police authorities are yet to make categorical statement on the missing traditional ruler, National Daily gathered that the Police have commenced search for the Onojie of Ewu to trace his whereabouts.

The traditional ruler of Nkerefi in Nkanu East Local Government of Enugu State, His Highness, Igwe, Peter Onuoha, and three members of the community were murdered by gunmen. It was gathered however, that the royal father and some youths in the community had a disagreement over a suspicious spiritual sacrifice he made in the community in 2014.

The traditional ruler of Elete town in Kogi State, Chief Aminu Aku, was kidnapped by men of the underworld.

The paramount ruler of Gbarantoru community in Yenagoa council area of Bayelsa State, Benjamin Weke, was kidnapped under similar condition, while barely two weeks earlier, two traditional rulers from Okpoama community in Brass local government area of the state, Blessing Wagio and Isaac Akono-Igolo were abducted through the waterways.

THE kidnappers of the traditional ruler of Iyani Akoko, Ondo State, Oba Joel Daodu, want N15 million ransom. He was kidnapped along Owo/Ikare Expressway. It was gathered that the Oba’s family is pleading that the ransom be reduced to between N500,000 and N1 million. Oba Daodu’s abduction is coming barely two years after the Regent of Akungba, Princes Oluwatoyin Omosowan, was kidnapped at the same spot. It will be recalled that the regent of Akungba Omosowon was held captive for two weeks before she was rescued by a combined team of Department of State Services, DSS, and the police in 2015. Oba Joel Daodu… Family begs with N500,000. Meanwhile, Oba Daodu was said to be travelling alone when the incident occurred, as a reliable source disclosed that he was driving himself, while returning from a social function. The Akoko Road is known to be notorious for robbery and kidnapping. His abductors had reportedly contacted his family, yesterday, requesting for N15 million ransom before he could be freed.

Some unknown gunmen have abducted a traditional ruler in Kogi, a family source said in Lokoja on Sunday.

The monarch, the Ohi of Ajaokuta, whose name was given Isah Achuja, was returning from Lokoja, the state capital, on Saturday when his vehicle was intercepted on the Lokoja-Ajaokuta road at gunpoint and the ruler taken to an unknown destination.

A member of the royal family, who did not want his name in print, told journalists that an aide to the traditional ruler and his driver narrowly escaped being hit by the bullets of the abductors.

He said the abductors had already contacted the family and demanded a N20 million ransom.

Contacted by the News Agency of Nigeria, the State Police Command’s spokesman, Williams Aya, said the incident had not been reported to the command.

He, however, promised that police would swing into action in a bid to rescue the monarch as soon as the details of the abduction were available.

The kidnapped traditional ruler of Ubulu-Uku in Aniocha South Local Government Area of Delta State, Obi Agbogidi Akaeze Ofulue, was later found dead in Umunede area of Delta State. It was earlier reported that the monarch was kidnapped few weeks ago between Igbodo and Obior area of the state after persons suspected to be Fulani herdsmen intercepted his car, a Toyota Land Cruiser SUV. The kidnappers reportedly waylaid him after his driver slowed down to drive through a bad spot. The kidnappers demanded a ransom of N100 million.Confirming the death of Obi Ofulue on Thursday, The Will newspaper quoted the spokesperson of the Delta State Police Command, Celestina Kalu, as saying the Command would issue an official statement on the development today, being Friday.

The kidnap of a Lagos monarch, Oba Goriola Oseni, the Oniba of Iba town, who was abducted by gunmen on July 16 and released after three weeks, is one notable attack. The monarch’s wife was shot and a palace guard, killed during the incident. 12 days before Oseni’s abduction, Oba Abiodun Oyewumi, the Laragunsin of Ode-Iyansan in Irele Local Government Area of Ondo State, was also kidnapped. He was kidnapped in his palace on Monday July 4, 2016, around 10:30pm by heavily armed hoodlums, and taken away through the waterways.

The legal tussle for the staff of office:

After 17 years of legal fisticuffs over who is the rightful successor to the late Isesele Obiefo II, the Onojie of Ewu Kingdom in Eastern Local Government, Edo State, who died in 1997, the Court of Appeal on February 14 ruled that Jafaru Isesele I is the legitimate successor.

The crisis started in 1997. Jafaru Isesele’s father, the Royal Highness Isesele Ojeifo II, was the Onojie of Ewu Kingdom. He had a first son, Prince Yusuf Ojeifo, who predeceased him.

Yusuf died in April 1997 while his father joined his ancestors on August 6, 1997. After his father’s death, as the eldest surviving son, and in accordance with the custom and tradition, Jafaru performed his burial ceremony. But after the burial, some people were complaining that he shouldn’t have performed the burial ceremony, they preferred the grandson, Rasak, to perform the burial ceremony of his father, which negates the custom and tradition. So, these people were aggrieved and they went to court in 1998, saying that, they wanted a grandson to take over the throne. “This has never happened in the town, and in fact, it is an abomination to the custom. Apart from what the custom says, there is a gazette, under the Bendel State Traditional Rulers and Chiefs of 1979, which is now applicable in Edo State”. According to the gazette, the eldest surviving son should survive the ruler after performing the burial ceremony of his father. That supports the customs and tradition of Ewu people. However, the aggrieved people insisted on going to court to challenge Jafaru’s legitimate right to the throne. Fortunately, in 1998, He got the first judgment in a suit they filed against his installation and was declared the legitimate successor to his father’s throne. Unfortunately, the government then did not show much interest in the matter, which to the best of Jafaru’s understanding was somehow hijacked by some politicians, who were in support of Rasak. They waited endlessly for the government to present Jafaru with the staff of office after the judgment but that did not happen. So, Jafaru and his men went to the High Court in year 2000 to ask for their legitimate right. They argued the matter until 2005 and again, he was declared the legitimate successor to the throne of his father. His opponents felt dissatisfied and went to the Court of Appeal, and again, on the 14th of February, 2014, the Court of Appeal upheld the judgment of the lower court, ruling that he is the rightful and legitimate person for the throne of his father and that he is the Onojie of Ewu Kingdom

When the matter was at the advanced stage in the High Court in 2004, the Edo State Government presented the staff of office to Rasak. When Jafaru’s side learnt that, their lawyer quickly filed a motion to counter the government’s action, saying that it was unlawful for the government to have done so when the matter was still in court. The presiding judge nullified the action and ruled that the staff of office presented to Rasak was illegal. After the judgment, which came in our favour in 2005, Jafaru’s side felt that the government would then do the right thing but they did not. Then, the Appeal Court in its judgment on February 14 did not only declare Jafaru as the winner, the court further ruled that the edict promulgated by the government is an illegal act, invalid, null and void. But Since then the sitting Onojie has been Rasak Ojeifo Isesele II.