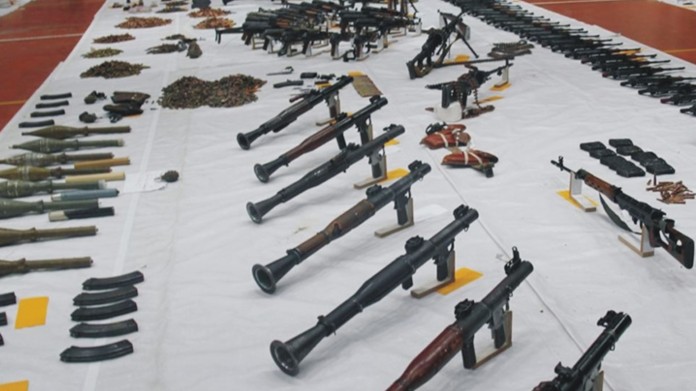 AN emanating intelligence discovery tends to reveal that arms proliferation in the country is being facilitated by the use of government vehicles and VIP convoys to aid illegal arms dealers, including drug barons.

According to the intelligence finding, illegal arms dealers are purportedly aided through the use of government vehicles, not subjected to security checks by the Police or other security operatives on highways and intercity link roads, to move arms and ammunition to various parts of the country where they are delivered for usage on evil missions.

Findings revealed that the drivers of the government vehicles are handsomely rewarded for their collaborations in the trade. It was, however, not confirmed if the drivers have the approval of their bosses before indulging in the illicit trade ‘transportation contract’.

The notorious politically motivated killings and violent arms struggles in different parts of the country have been thriving on the proliferation of illegal arms delivered into the hands of people who are not legally authorized to possess arms and ammunition.

This new finding made the control of arms circulation in the country uncontrollable, thus, jeopardizing the security of the country, despite efforts by the various security organisations to stem the proliferation, which has led to perennial monstrosity of killings of innocent citizens.

This is worsens the security crisis as little or no success is made in the efforts to curtail the multiplicity of unlicensed guns finding their way into the hands of criminals.

ALSO SEE: State of the nation: Our Fulani and herdsmen of mayhem?

As part of strategic ploy to limit the circulation of illegal weapons in circulation, the Inspector General of Police, Solomon Arase, took some measures recently, which include granting extension order on the deadline for the on-going re-validation of Tinted Permit, Police Character Clearance and Firearm Licence from 18th March, 2016 to 31st May, 2016.

Investigation by National Daily affirmed that complementing the porous borders and alleged corrupt practices of some security agencies saddled with the responsibilities of manning the borders, seaports and airports, the distribution and movement of arms smuggled into the country, are often carried out with government vehicles, convoys, ambulances and entourage of high profile politicians leaders, with some assuming “larger than life” posture and often times, undermining the law enforcement agents.
Often times, the helplessness of the security operatives is said to be borne out of “official order” to brand some individuals above the law while they use the opportunity of “lavish encomium” to commit varying degrees of crimes against the government.

In recent times, various caches of arms were seized at both the seaports and airports which were illegally shipped into the country in containers concealed within marble slabs.

Ammunition of various calibers, including 7.65mm light ammunition with cartridges, 60mm, 80mm and 120mm mortar, rockets with firing pins and grenades were detected at the ports, leading to the arrest of the culprits. Unfortunately, not very many of those arrested have been prosecuted for such heinous crime to serve as deterrence to others.

In 2009, Boko Haram insurgents were said to be using merely bows, arrows and hunting guns. As at now, the notorious sects can boasts of sophisticated fire arms that can match those used by the military.

It was gathered that the careless and irresponsible ways in which arms are smuggled into the country helped this evil transformation of a mere radical sects to an internationally recognised terrorist organization.

A survey indicated that in approximately over 500 million illicit weapons in circulation worldwide, it was estimated that about 100 million are in sub-Saharan Africa, with eight to 10 million concentrated in the West African sub-region. Regrettably, it was revealed that more than half of these Small Arms and Light Weapons are in the hands of non-state actors and criminal gangs. Sadly, Nigeria is said to account for over 70 per cent of illegal small arms and light weapons (SAW) circulating within the West African sub-region

In addition to government official vehicles, some other vehicles using branded stickers of various security agencies were identified to be also involved in the movement of illegal arms. It was revealed that they serve as decoy or bait to other security operatives who give them preferential treatment and let them continue their journeys unsearched.

A lawyer and Human Rights Activists, Gabriel Giwa-Amu, advocated that vehicles with stickers should not be allowed to pass police checkpoint unsearched. He observed that considering the volatility of arms in circulation, the Police should search vehicles with armed escort personnel and convoys to curb the movement of illegal arms in the country.
Giwa-Amu, in an interaction with National Daily, said that the proliferation of illegal arms and recent killings in some parts of the country can be blamed on politicians, arguing that

it is easier for any politician who has escort security personnel and convoy vehicles to move arms to any part of the country, as no security agent would stop and search his vehicle(s).

“It is pathetic that human life has been reduced to nothing in this country. It is sad that our borders are so porous; the Nigerian Customs Service and other security agents are doing their best, yet illegal arms still find their ways into the country,” he said.

In Lagos State, the Commissioner of Police, Fatai Owoseni, disclosed the mopping up of illegal arms in circulation, especially, from criminal elements, indicating that some were arrested with 11 arms and 49 cartridges.

Giwa Amu cautioned that, “If this is not checked, we might be in for graver troubles.” He urged the police to intensify their search of convoy vehicles and politicians with security escort personnel for illegal arms. He charged the security agencies, particularly, the Customs and Police, to rise up to their responsibilities.

He narrated that, “a traditional ruler was in a convoy, among which there was an ambulance vehicle supposedly conveying the remains of a dead relation to a state recently. Incidentally, it was discovered that the so-called corpse inside the casket was nothing but a cache of arms and ammunition.” Giwa Amu remarked that there are some stickers the Police will see on vehicles, they will just allow them to go. “Those vehicles are channels of illegal arms movement in the country,” he declared.

Moreover, Tunji Olawole, a stakeholder in the Nigerian project, blamed desperate politicians who import I arms illegally into the country to shed the blood of innocent.
Okon Johnny, Managing Director with a private security organization, also said that illegal weapons became widespread in Nigeria, after the 2015 general elections. “You can imagine what happened on March 4, where more than 10 persons were killed and property worth millions of Naira destroyed at the Mile 12 Market area of Lagos State during a clash between a commercial motorcycle operators and hoodlums,” he noted.

Recent violence in Agatu by Fulani herdsmen and in other parts of the country leaves one in doubt as to how some of these arms come into the country undetected. In some states, cattle rustlers, armed robbers, cultists and insurgents, have staged pockets of violence, using illegal arms and ammunition to perpetuate heinous crimes.

In an attempt to check arms proliferation, the on-going efforts by the Federal Government, the various security agencies comprising the Police, the Armed Forces, State Security Service (SSS) and other paramilitary agencies, Customs, Immigration, etc, have received fresh directives from the Presidency to begin the screening of any vehicle bearing government logo or stickers attached to it.

A top Police officer at the Force Headquarters, Abuja, who disclosed the new mandate to National Daily at the weekend, confirmed that some arrests have been made in some states, which include Rivers, Bayelsa, Delta, Borno, among others. He noted that large quantities of arms and ammunition are in illegal hands instead of security personnel who are saddled with the responsibility to use Arms to fight crimes or defend the territorial integrity of the country.

A source hinted National Daily that over the years “politicians who engaged in purchasing arms for thugs during elections usually convey them through vehicles using federal, state or local government vehicle plate numbers or stickers that will easily pass through police check points. Some, he added, use Police Spy plate number.

National Daily, investigation also revealed that apart from using Government vehicles for arms trade, it has also been uncovered that drug barons also use government vehicles to move narcotics from one destination to the other, beating all security check points in the process.

Reacting, the Force Police Public Relations Officer (FPPRO), ACP Olabisi Kolawole, said that anyone found in possession of illegal arms and ammunition would be arrested and prosecuted.

She reiterated that the possession of illegal arms was prohibited. “Illegal arms are illegal. We are re-registering personal firearms and issuing appropriate licences. This will help us to ascertain the number of firearms in the country. Whoever is caught with unlicensed firearms will be prosecuted according to the laws on illegal arms possession,” she declared; stressing, “we would continue to confiscate illegal and prohibited firearms.’
She called on law abiding citizens to avail necessary information that would lead to arrest of individuals in possession of illegal arms in the country.