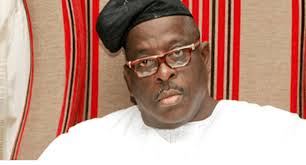 Senator Buruji Kashamu, representing Ogun East Senatorial District, in the National Assembly on Friday revealed that he has field an appeal at the Supreme Court to quash the move to extradite him to the United States of America where he is alleged to be having pending trial over illicit drug deals.

The Senator responding to the judgment of the Court of Appeal in Lagos on Frida, May 4, 2018, refuted having any extraction suit in any court in Nigeria but disclosed that his lawyers have filed a Notice of Appeal and a Motion for injunction pending the determination of the appeal at the Supreme Court of Nigeria.

In a statement on Friday where he debunked reports linking him to extradition suit in the court, the embattled Senator declared: “In the meantime, my lawyers have filed a Notice of Appeal and a Motion for injunction pending the determination of the appeal to the Supreme Court of Nigeria. And I trust that the apex court will do justice. I also wish to use this medium to appeal to all my associates, lovers, supporters and leaders to remain calm. The truth shall prevail over falsehood as light triumphs over darkness.”

Kashamu  explained that the judgment of the Court of Appeal sitting in Lagos in an appeal filed by the Attorney-General of the Federation (AGF) against the judgment delivered by the Federal High Court, Lagos, was related to a fundamental human rights enforcement suit which he said was in his favour.

Kashamu declared that there is no extradition suit against him in any court in Nigeria or abroad. He remarked: “The illegal move surreptitiously introduced by the powers-that-be after the 2015 abduction plot was exposed has been dismissed. That was in Suit No. FHC/ABJ/CS/479/2015. The suit was dismissed on the 1st of July, 2015, for being an abuse of court process. Anything to the contrary is sheer mischief and over sensationalism by some reporters.

The Senator acknowledged that the Office of the Attorney-General of the Federation and Minister of Justice appealed the judgment of the Federal High Court in the fundamental human rights enforcement matter comprised in Suit No.FHC/L/CS/508/2015 which he had instituted in 2015 upon becoming aware of the surreptitious moves by certain persons to abduct him illegally and transport him to the U.S.A. without recourse to the rule of law.

“In its judgment in Suit No: FHC/L/CS/508/2015,the Federal High Court restrained the Federal Government, its agents and agencies from abducting and forcibly transporting me to the United States of America over the same allegations that two British courts had adjudicated upon and found that to be a case of mistaken identity,” Kashamu stated.

“So, clearly what was appealed and decided upon by the Court of Appeal today has nothing to do with extradition. Rather, it was about the failed 2015 abduction,” he noted.

He stated that there is no way any extradition proceedings can be brought against him in the face of the law.

in his statement, Kashamu highlighted: “What I have been fighting is the attempt to abduct or kidnap me in the guise of an extradition… the purported extradition case that was filed against me in May 2015 was dismissed by the Federal High Court, Abuja, for being an illegality.  It could not stand the test of the law.

“The case could not have seen the light of the day in Nigeria or any civilized country. That was the point the trial judge, the Honourable Justice Gabriel Kolawole, made in the judgment when he described the incident as “a show of shame”.

“He found it incomprehensible that any government official or agency could want to take any step or collaborate with some foreign agents under any guise to perpetrate an illegality after several courts had given judgments against such an action.

“So, in the face of the law, that case cannot be brought again! Any other talk or insinuations about a non-existent extradition only exists in the imagination of the mischief-makers.

“Therefore, there cannot be any other extradition but abduction and an illegality.

“This is even more so when the judgment of the British Courts that found the allegation against me to be a case of mistaken identity was not appealed.

“If a court of competent jurisdiction has pronounced that I AM NOT the person who committed the offence and same verdict has been upheld by our own courts, there is no way this finding and pronouncements of the court can be jettisoned for illegality.

“It is this illegality that the Senate frowned at in a resolution passed on the 11th of April, 2017.”

The embattled Senator said that the Senate, through its Committee on Ethics, Privileges and Public Petitions, resolved, “That the concerned agencies and authorities be advised to stop threatening or carrying out any activities to extradite Senator Buruji Kashamu to the United States of America for prosecution, and that the courts be allowed to handle the various aspects of the case before them without any interference.”

There were reports that the senator evaded justice in the US over purported trial on alleged illicit drug deals. He was alleged to have since been placed on the wanted list of the country.