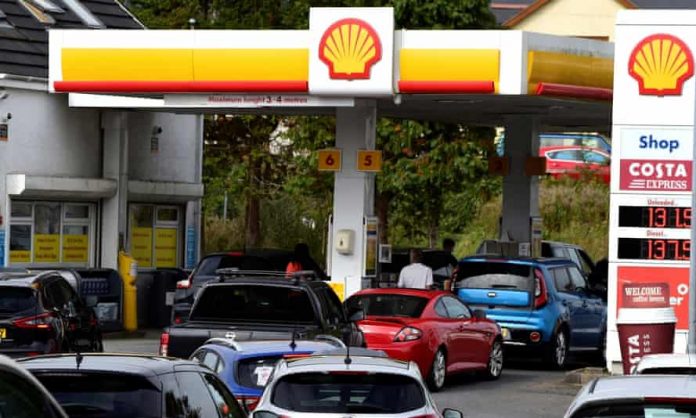 The UK has put scores of troops on standby to help tackle the fuel crisis as ministers are set to meet to assess the latest data on the chaos at petrol stations across the country.

Brian Madderson, chair of the Petrol Retailers Association, a trade body, said the majority of service stations were without petrol and diesel on Monday, with members reporting between 50 and 90 per cent of independent sites had been drained dry by weekend panic buying.

Two Whitehall officials confirmed that the army was on a state of high alert as of Monday morning, with the military expected to help with fuel distribution, known in government as Operation Escalin, by providing trained heavy goods vehicle drivers.

One government insider said: “We have 150 troops on standby if ministers decide to give the go-ahead.” Another official said that a final number had not been confirmed but “troops are in readiness”.

But environment secretary George Eustice said on Monday there were “no plans” to draft in the army imminently. “We always have a civil contingencies section within the army on standby, but we’re not jumping to that necessarily at the moment,” he said.

Government ministers will meet later on Monday to examine the latest data from petrol stations and whether further action needs to be taken. The UK has some 8,000 petrol stations, the majority run by independent retailers, some of whom operate franchises using the big oil companies’ brands.

The shortages at fuel stations on Monday followed a weekend of panic buying sparked by reports of delivery problems, on a limited scale, caused by a Britain-wide dearth of HGV drivers, which has caused supply-chain problems across the economy.

Industry bodies representing London’s black taxis have asked the mayor of London, Sadiq Khan, to push the central government to issue an emergency order to designate fuel stations only for “essential users”.

Downing Street did not rule out bringing in soldiers but insisted current “mitigations” would be enough to avoid such action.

Shane Brennan, chief executive of the Cold Chain Federation, which represents the chilled distribution industry, said that despite the shortages at forecourts they had “no significant concerns about access to fuel either for trucks or for refrigeration units [which run on diesel]”.

There are fears within government and industry that with most forecourts in the country running dry there will be knock-on effects to the wider economy, with almost every sector and society reliant on regular fuel deliveries.