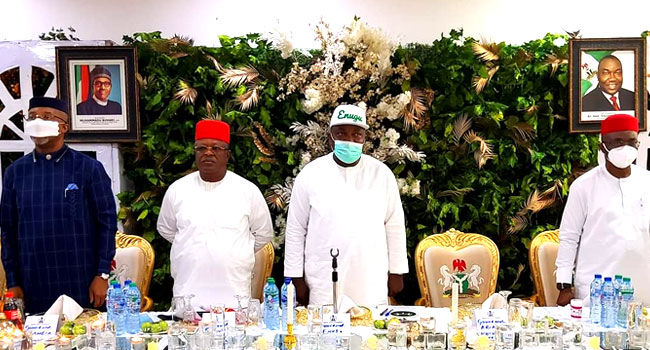 Governors of the five southeast states that constitute the Southeast Governors’ Forum, Ministers in the federal cabinet of President Muhammadu Buhari from the southeast, including some elder statesmen in the southeast, at the weekend disowned the leader of the Indigenous People of Biafra (IPOB), Nnamdi Kanu, what he stands for in the zone, and the IPOB struggle. They further rejected Biafra and the agitation for independence.  The southeast leaders declared that the activities of Kanu, the group he leads, and other agitation groups, do not represent the view or demands of the southeast.

The five southeast governors, the ministers and others set aside the differences in their political party affiliations at a meeting on Saturday in Enugu, Enugu State, to deliberate on the insecurity crisis in the southeast states, and unanimously condemned the secessionist groups in the region and other parts of Nigeria. Secessionist agitations in the southeast are dominated by IPOB, the Biafra National League (BNL), and the inactive MASSOB. The other part of the country where there is agitation for secession is the southwest Nigeria, and the agitation is led by Sunday Igboho. Nnamdi Kanu, leader of the IPOB, has been the most vocal voice for the sovereign state of Biafra in the southeast after Ralph Uwazurike, leader of MASSOB.

The southeast governors, who comprise of Governor Dave Umahi of Ebonyi State, and Chairman, Southeast Governors Forum, Governor Okezie Ikpeazu of Abia State, Governor Willie Obiano of Anambra State, Governor Ifeanyi Ugwuanyi of Enugu State, and Governor Hope Uzodinma of Imo State; and other participants at the meeting who include the Minister of Labour and Employment, Dr. Chris Ngige; Minister of State for Mines and Steel Development, Uche Ogah; former Secretary to the Government of the Federation and former Senate President, Pius Anyim, also religious and traditional leaders, dissociated themselves from the IPOB agitation for Biafra and other secessionist groups in the southeast zone. They collectively condemned the violence outburst culminating into loss of lives, destruction of properties, including killing of policemen and burning of police stations and other government facilities in the zone.

Chairman of the Southeast Governors Forum, Governor David Umahi of Ebonyi State, reading a communique at the end of the meeting, declared: “We condemn in totality, the activities of violent secessionist groups in the Southeast and elsewhere; we firmly proclaim that we do not support them, they do not speak for Southeast.

“The impression that Southeast leaders are silent over some of our youths’ agitations for secession is not correct.

“Southeast Governors, Ohanaeze President, National Assembly members, notable leaders had come out publicly many times in the past to speak against such agitations.

“In order not to mismanage the unfortunate situation, Southeast leaders have set up a committee to engage such youths to stop and allow elders speak to address such fears.”

Participants at the Enugu meeting insisted on one united Nigeria, covertly accepting the injustice and inequality perpetuated by the Buhari administration against some parts of Nigeria.

The governors and other southeast leaders at the meeting acknowledged threats by some groups against the southeast people, promising to protect all Igbo people within the Southeast and other regions.

The southeast leaders also appealed to leaders of other regions to protect the Igbos living in their communities.

The meeting reiterated its condemnation of the killing of security agencies, burning of strategic infrastructure, and killing of civilians in the southeast and other parts of the country.

The participants demanded members of the National Assembly from the southeast to support the constitutional amendment for establishment of state police.

The communique further read: “We, the Igbos do reaffirm our commitment to one united Nigeria under a platform of justice, equity of rights, fairness, love, and respect for one another.

“The meeting endorsed our Southeast joint security outfit – Ebubeagu and asked them to work with security agencies and to respect the rights and privileges of all those living in southeast and our visitors.”

There are, however, fears in Igboland that the governors, ministers, religious and traditional rulers in the southeast may be betraying Nnamdi Kanu and trading off the genuine interest and expectation of the Igbo people for political gains, particularly, their negotiation for the president in 2023.

It will be recalled that Governor Nasir El-Rufai of Kaduna State had penultimate week told the Igbo leaders that they cannot be demanding for the president in 2023 in the storm of agitation for the separation of Biafra from Nigeria. the Kaduna governor and other political leaders from the north had told the southeast leaders to forget the presidential ticket for the 2023 election in their agitation for Biafra.

Some other northern leaders have also intimidated the southeast leaders of prolonged silence over the Biafra agitations vis-à-vis their demand for the 2023 president.

However, several Igbo stakeholders had told the northern leaders to take their president and allow the Igbo nation have Biafra. Apparently, the Igbo populace prefer Biafra to 2023 president; their elite, however, have contradictory interests.