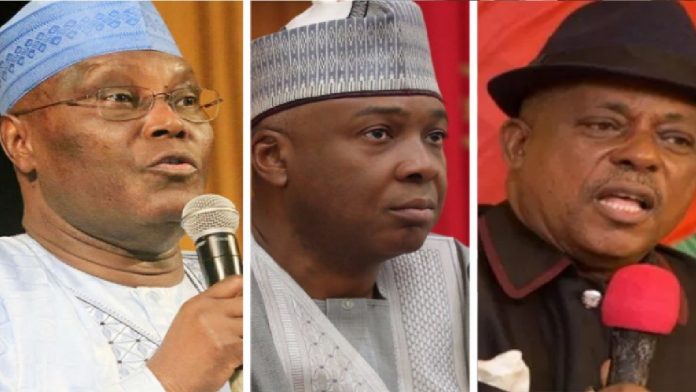 Governors under the banner of the Peoples Democratic Party at the weekend emerged victorious as their candidates now occupy various positions in the party’s National Working Committee, defeating the candidates supported by former Vice President, Atiku Abubakar and former Senate President, Bukola Saraki, key leaders of the party.

Also, for the first in the history of the opposition party, all the machinery necessary for organising the convention from the zoning committee, convention committee, and all-sub-committees, were headed by the governors.

National Daily gathered that both heavyweights were rooting for Governor of Osun State, Olagunsoye Oyinlola as the deputy national chairman of the party (South) who eventually lost to former Deputy Governor of Oyo State, Taofeek Arapaja who was backed by PDP Governors after Governor Seyi Makide to convinced his colleague Governors to also back Arapaja.

Oyinlola is a key loyalist of Atiku over the years. He was very active and helpful during the 2019 presidential election which Atiku contested. In fact, to prove his loyalty, he resigned the top post he was occupying then and joined Atiku’s team to handle his presidential campaign.

Similarly, Saraki has proven to be Atiku’s strong ally. In the same 2019 when Atiku emerged the candidate of PDP, Saraki who had lost the primary, queued behind Atiku. He became Atiku’s campaign Director General.

It was reported that both Atiku and Saraki had to even leave their seats and reached out to PDP delegates to solicit for support for Oyinlola during the convention in Abuja. That showed how much they worked for him and the extent they tried to ensure that their preferred candidate won. But, that did not work out.

This was because PDP Governors who control the party structures in their various states and regions teamed up against the two bigwigs in the party.

Makinde preferred to have his man in that post which will help to solidify his hold on the PDP as the leader of the party in the South West instead of having Oyinlola who is Atiku’s core loyalist occupy the post. At the end, Arapaja won the contest by polling 2,004 votes while Oyinlola got 705 votes.

The governors have also resolved to fortify the PDP Governors Forum as the most formidable and influential bloc in the opposition party ahead of the presidential nomination, a source said.

The source, who pointed out that the 13 governors have taken over completely the party structures by installing a majority of the members of the National Working Committee (NWC), added that they also want to produce the presidential running mate.

The plot by the governors may put more hurdles on the path of other presidential aspirants, including Atiku, Kwankwaso and Saraki.

PDP governors said to be interested in the presidential ticket are Sokoto State Governor Aminu Tambuwal and his Bauchi counterpart, Senator Bala Mohammed.