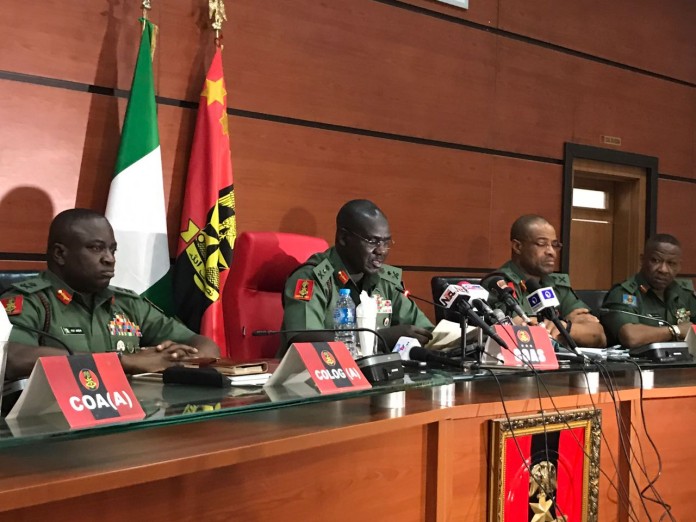 Share this on WhatsApp
Spread the love
By OKOSUN DENNIS
Disturbed by allegations of human rights violations against its personnel, the Chief of Army Staff, Lt Gen. Tukur Buratai, on Wednesday inaugurated a seven-man “Special Board of Inquiry’’ to probe alleged cases.
National Daily learnt that most of the violations were committed during the ongoing
counterinsurgency operations in the North East.
The board is headed by Maj Gen. Ahmed Jibrin (retd). Others include retired Brig Gen. Dadan Garba, retired Brig.-Gen. Abdulqadir Gumi, Brig Gen. O.L. Olayinka, Col. L.B. Mohammed, Col. U.M. Wambai, while Lt Col. C.M. Akaliro would serve as Secretary.
Gen Buratai said that in spite of the success recorded by troops in the ongoing counter-terrorism operations in the North East, some individuals and organisations alleged cases of misconduct and human rights abuses by personnel of the army.
“Some these happened in the early days of the counter terrorism and counter insurgency operations.’’
The army boss said “notably, the Amnesty International reports, Indigenous People of Biafra (IPOB), other groups and individuals have made allegations of human rights violation of arrested Boko Haram terrorists against some of our senior officers and commanders.
“The allegations range from extra-judicial executions, arbitrary arrests, detention, torture and enforced disappearance of suspected Boko Haram terrorists.
“These allegations are not good for civil-military relations and are capable of demoralising Nigerian army personnel in the performance of their constitutional roles.”
Buratai noted that due to the witty nature of the allegations, it was necessary to find out the facts of the matter to enable relevant authorities to take appropriate actions.
National Daily gathered that the board was set up in line with the provision of Section 172(1) of the Armed Forces Act CAP A20 Laws of the Federation of Nigeria, 2004.
However, the army boss warned the board not to probe or revisit cases of abuse that had been investigated by state governments or the National Human Rights Commission.
The head of the panel, Jibrin, the head of the board, assured that members would do an objective job.
He said “we will travel to all the necessary places; we will also invite and interview all stakeholders to ensure that we get to the root of the matter.
“The allegations are many and the places to go are also many, people to talk with also are many but we will do everything possible to ensure that we finish our task as quickly as possible,” he added.
Share this on WhatsApp