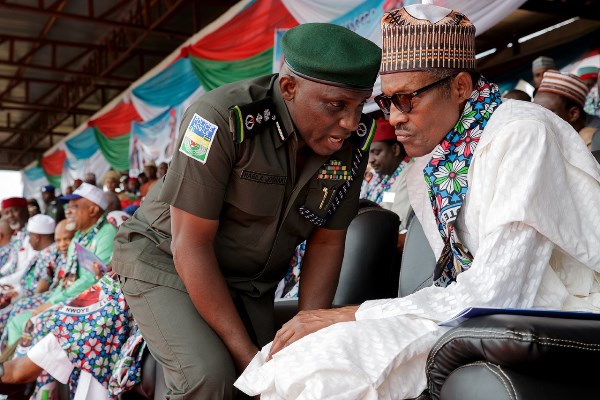 Nigerian democracy has finally slided into one of jackboot democracy and gunboat loyalty. You either toe the line of the ruling party, or get run out of town by government security apparatchik, especially the EFCC, Police, DSS and ICPC. It has never been so bad; not even during the military juntas when Decrees 2 and 4 were used to hunt down critics of government.

The latest of these atrocities and undemocratic acts were witnessed in Benue State yesterday, where the Police and DSS physically aided 8 renegade Benue state House of Assembly members to force their way into the hallowed chambers, to begin a purported impeachment proceedings against the governor. They were led by a man who had earlier been removed as speaker by the majority and even suspended. A court order was to affirm this removal and suspension with judicial imprimatur.

It is inconceivable that Nigeria could be brought down to this sorry state of nadir, this political mockery through utter desperation by a clueless, non performing government that has spent over three years of its governance blaming past administrations, spreading poverty, hunger, insecurity, monumental corruption, disease, squalor and parlous economy.
For the information of the uninformed advisers of this desperate government that will praise to high heavens today, a governor, politician or legislator when begging him at night like Nichodemus (in the full glare of cameras), and demonize and criminalize him the following day, when he decamps to another political party. Eight members of a House of Assembly of 30 cannot form a quorum to serve impeachment notice on a sitting governor.
Impeaching a sitting governor is a very serious moral and constitutional issue, because it tantamounts to upturning the clear decision and will of the people of that state who had voted the governor into office for a fixed term. Section 188 of the 1999 Constitution prescribes at least 8 major steps that must be taken towards impeaching a governor, beginning with a notice in writing signed by not less than one-third of the members of that state House of Assembly, alleging “gross misconduct” against the governor.

In the Benue state case, there are 30 members. One-third of 30 is 10. But, the farce witnessed yesterday was a suspended former Speaker (who is therefore not even a member of the House for now), leading 7 other members with the full protection of Police and DSS to gatecrash into the Assembly, while the legitimate 22 members were securely locked out. Seven members cannot form a quorum to serve a notice of impeachment on Governor Samuel Ortom. At least, 10 members are required. The members that schemed this legal and constitutional hara-kiri of purporting to give impeachment notice to the governor are actually 7 not 8, as erroneously published in so many quarters. Once the former speaker was removed and suspended by the majority for six months, he ceased to be a member of the House for the period of suspension. To suspend is to adjourn, postpone, defer, interrupt, arrest, delay, keep in abeyance or interlude, or shelve.

So, when the former speaker, Mr. Terkimbi Ikyanye (APC Ushongo), was removed, suspended and replaced with Mr. Titus Ubah (APC Kyaan), his membership of the Assembly, going by the meanings of “suspension” was effectively deferred, interrupted, adjourned, postponed, shelved, or kept in abeyance and interlude. He cannot therefore, during the period of suspension, attend, participate in, or contribute to the business of the House. He becomes a total stranger on the floor of the House who can neither sit nor vote during proceedings in accordance with section 56, 57 and 63 of the 1999 Constitution.

Consequently, only seven members brazenly and shamelessly (aided by the Federal Police and DSS), attempted to impeach a sitting governor. Nigerians witnessed some desperations in the past in the illegal removal of some governors (using the jackboot and gunboat tactics). Such illegally impeached governors were Peter Obi (Anambra state, 2nd November, 2006); Joshua Dariye (Plateau state, 13th November, 2006); Ayodele Fayose (Ekiti state, 16th October, 2006); Rashidi Ladoja (Oyo state, 12th November, 2006); Diepreye Alamieyeseigha (Bayelsa state, 9th Decemeber, 2005); and Murtala Nyako (15th July, 2014). In most of these cases, the impeachment was reversed by courts of law that berated the government for committing constitutional aberrations. How come a government that promised change from the old ways is now the one spearheading the most blatant forms of constitutional crisis, simply to enforce gunboat loyalty through jackboot democracy? How can a minority of seven members take steps that should be taken by at least 10 members? How can a minority of 7 be aided to terrorize a majority of 23?

Only last week, Police were deployed to the Ekiti state House of Assembly for what they termed “security reasons”. It was clear that the government was in a hurry to force out Governor Fayose even before the October handover to his successor in a hotly disputed and rigged election already the subject matter before the Election Petition tribunal. It took the Speaker, Hon Kola Oluwawole and the Clerk, Mr Tola Esan, to shout out that they never requested for Police to guide a House already on vacation, before the misguided action was aborted.

There are 8 major steps in an impeachment proceeding, which involves the sitting Speaker, the Governor, the Chief Judge of the state, two-third majority members of the House, setting up an impeachment panel, right of reply by the governor, etc. The fact that the first foundational step of the giving of a constitutionally valid notice of impeachment by one-third of the members failed has already dealt a fatal blow on the satanic and luciferous shenanigans of an impeachment. The entire process is therefore aborted and was dead on arrival; as dead as dodo.

I hereby appeal, most earnestly, to President Muhammadu Buhari to save our hard-earned democracy from sliding into the abyss of extinction. Our democracy is dying by instalment, on a daily basis. The international community must rise up to help Nigeria help herself. All lovers of democracy must speak up before it is too late. This government should stop dancing on the cold graves of men, women and children who were murdered in cold blood by marauding herdsmen, while the same government looked elsewhere.

A governor who was praised to high heavens last week as a great performer and redeemer has suddenly been found corrupt (with the decamping legislators), by the EFCC. Because he audaciously crossed carpet against all dangled sticks and carrots. Senator Rabiu Kwakwanso who was canonized as a saintly stateman who helped to midwife the ruling party suddenly lost his political address whose exit must be “celebrated”, all because he shocked the powers that be with his deft Machiavellian sophistry and political sagacity.

Loyalty cannot be enforced with brute force, coercion, intimidation and harassment. Cherished freedoms of speech, movement have been guaranteed under sections 39, 40 and 41 of the 1999 Constitution.

Is Proverbs 24:21 being realized before our very eyes?: “My son, fear thou Jehovah and the King; and associate not with them that are given to change”.