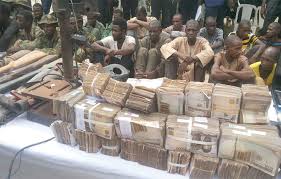 No fewer than 81 suspected kidnappers, armed robbers and cyber scammers arrested in Taraba, Kaduna, Kano, Katsina, Sokoto and Zamfara were paraded in Abuja on Monday.

Among the suspects are Chadian and Nigerien suspected kidnappers and six ex-convicts, who abducted a Sokoto businessman.

They were apprehended by the Intelligence Response Team and the Special Tactical Squad of the Nigeria Police Force.

Some of the kidnap ring members were dressed in military camouflage and Nigerian Air Force uniform.

The Sokoto gang were said to have formed their gang while serving terms in the Katsina Correctional Centre.

“We became friends when we were serving jail terms in the Katsina Correctional Centre. During interaction, we got to know that we were about completing our jail terms,” the gang leader, Muhammed, said.

“That was when we decided to shift from armed robbery to kidnapping. This is because we knew that we would make more money from it.”

According to him, their first target was a Sokoto-based businessman whose family parted with millions of naira.

The gang operated on the Zaria-Kaduna-Kano Expressway 12 times, adding that they collected several millions of naira in ransom from their victims’ families.

The sum of N10.1m was recovered from them as well as rifles and rounds of live ammunition.

A member of the  camouflaged gang explained that they had carried out six robberies on the Abuja-Kaduna Expressway.

According to the member, a Fulani man from Jaji, the base of  the Nigeria Defence Academy, supplied them the uniforms

“I am a farmer and also an armed robber. I have engaged in six robberies before I was arrested,” said Imuranu Ibrahim.

“We were on a robbery operation on the Abuja-Kaduna Expressway when we saw a car conveying a man, his wife, mother and their two children.

“We pulled out the woman from the vehicle and raped her in the presence of her husband, children and mother-in-law.”

Force spokesman, DCP Frank Mba, said members of a kidnap gang, which killed four policemen, were also nabbed, while police rifles were recovered from them.