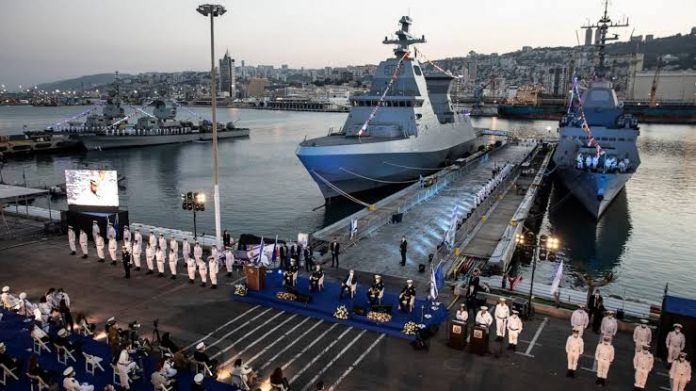 Share this on WhatsApp
Spread the love
The last of four corvettes built in Germany for Israel’s navy has reached Haifa following a two-week voyage from the northern coastal city of Kiel.
Corvette is a small warship designed mostly for convoy escort duty.
The vessel, named Nitzachon which was Hebrew for victory, docked on Monday evening, according to the Israeli army.
The corvette was handed over to the Israeli navy in Kiel at the end of July.
Israel had ordered four corvettes that were manufactured in a joint project of the Kiel yards Thyssenkrupp Marine Systems (TKMS) and German Naval Yards.
They were intended to form a key part of Israel’s navy for the next 30 years, helping to protect gas extraction platforms in the Mediterranean.
The contract for the four SA’AR 6 ships, some 90 metres long and 13 metres wide, was signed in May 2015.
Israel was providing the radar and weapons systems.
There were protests in mid-August by Greenpeace activists from Israel and Germany, who rallied in Kiel, opposing the departure of the corvette and the use of fossil fuels.
The activists were critical of the fact that the vessel was to be used to protect gas production off the Israeli coast which was harmful to the climate.
Furthermore, German arms deliveries to the region were a subject of controversy in Germany.
The value of the deal has not been released, but according to earlier information, the German government was financing about a third of the value with 115 million euros (136 million dollars).
Share this on WhatsApp