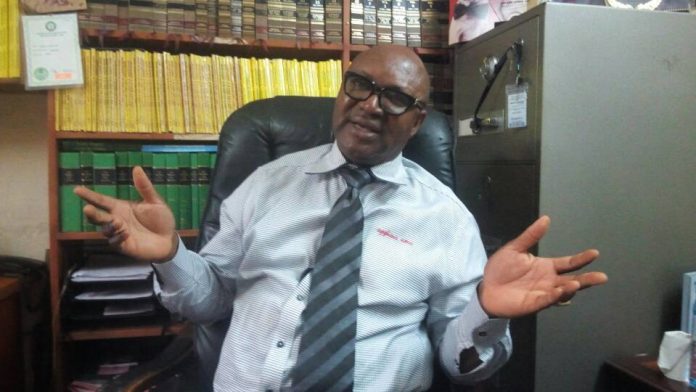 Share this on WhatsApp
Spread the love
The question of massive corruption has plagued successive governments in Nigeria.
However, the coming in of the present government has not changed the scenario as massive corruption and pillaging of coffers remains an embarrassment. Okosun Dennis had an exclusive chat with a Lagos lawyer and human rights activist, Barr. Giwa Amu , who lambasted the President of slow attitude to responding to corruption issues involving his aides and lieutenants. He also punched the NASS alleging that they are “head and neck” deep in corruption. Excerpts:
We have  an APC government claiming to fight corruption. Over two years down the line, are you convinced that corruption is actually being fought?
I believe that corruption is being fought but not sufficiently. I also believe that when you talk about the fight against corruption; it must be tough and holistic. But in this case, it is regrettable to say that the fight is not holistic. There is a fight going on, but it is not complete in itself and it tends to suggest that the fight is not met to be holistic and it is very sad. I believe having handed over the Vice Presidential Committee report to the President on Babachir Lawal, the President Buhari ought to have acted on it the next day not even a week after. Why set up the committee if you know you are going to delay implementing its reports? The Committee was not just made up of two people; you have the Vice President whom he trusted so well and relayed on his judgment. I don’t think the president is reading anything in that report; he has nothing to read in it and he cannot dispute figures there too. He cannot dispute the procedure adopted because he set up the committee. In fact, if he wants to tell Nigerians that he is actually fighting corruption, he should hand over that report to EFCC for immediate investigation and prosecution. Sacking Babachir is not enough.
When you say this government is fighting corruption but not to the extent that people expect, what are the indexes to show that this government has fought corruption within the last two years?
The truth of the matter is that politicians are the most slimy, dangerous rattle snakes you can find. The confusion here is that if you are going to fight corruption, make it holistic. If it is not going to be holistic, don’t use it as a weapon to hit up the polity; to make everybody focus on the purported anti-corruption drive when there are some people who have executive immunity. I support Muhammadu Buhari in every way. But his fight against corruption is polluted.