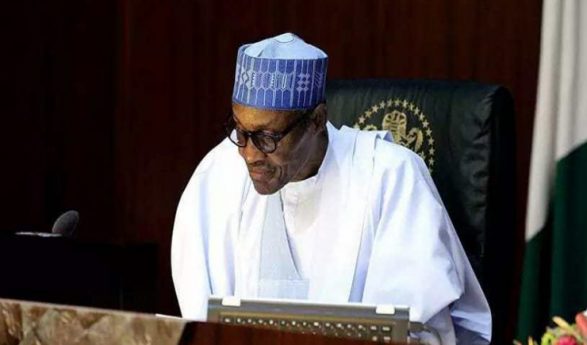 Share this on WhatsApp
Spread the love
By OKOSUN DENNIS
Two days after returning to the country from the United Kingdom on a 103-day medical vacation, President Muhammadu Buhari on Monday morning addressed the nation applauding the citizenry for their prayers which made it possible for him to be back home.
He noted that Nigerians unity is settled and was not negotiable admonishing Nigerians to join hands to build a united and prosperous nation rather than preaching ethnic divisiveness and disunity.
President Buhari said, “We shall not allow irresponsible elements to start trouble and once it gets bad, they run away and settle outside with the responsibility of bringing back order, if necessarily with their blood.
“In 2013, after I joined partisan politics, the late Chief Emeka Odumegwu Ojukwu came and stayed as my guest in my home town in Daura. Over two days, we discussed in great depth into the night and analysed the problems of Nigeria. We all came to the conclusion that the country must remain as one and united.
“Every Nigerian has the right to live and pursue their businesses anywhere in the country without hindrance. Every group has a grievance but the beauty and attraction of a federation is that it allows different groups to air their grievances and fashion out a better way to deal with issues.
“The National Assembly and the National Council of State are the legitimate and appropriate bodies for national discourse. It is better to leave together than to live apart,” he reiterated.
While commending the security agencies for the successes against Boko Haram elements in the last 18 months, admonished them not to relax in their oars to fight terrorists to a logical conclusion.
He vowed to fight Boko Haram elements and other insecurities, stressing that “I am charging the security agencies not to allow the successes achieved in the last 18 months to relax.
ALSO SEE: Why Buhari suddenly changed his mind after insisting he’d obey doctors’ instruction
“Terrorists and criminals must be fought and destroyed relentlessly so that majority of us can live in peace and safety. We are going reinforce and reinvigorate the fight not only against Boko Haram which are attacking soft targets, Kidnappings, farmers and Fulani herdsmen clashes, in addition, ethnic violence  fuelled by political mischief makers shall be tackled.
“Our collective interest is to eschew petty, ethnic differences and come together to face common challenge of the economy, security, political, evolution and integration as well as lasting peace among Nigerians.”
He appreciated the prayers rendered by Nigerians while he was on sick bed in the United Kingdom. “I am very grateful to God and all Nigerians for their prayers and pleased to be back home.”
His five-minute broadcast did not end without lambasting the social media for the unsavoury reportage that went too far. “In the course of my stay in the United Kingdom, I kept daily touch with events at home. Nigerians are robust and lively in discussing their affairs but was distressed to note that some of the comments especially in the social media have caused our nation red lines by daring to question our collective existence as a nation.
This is a step too far.”
He appealed to all and sundry that he would “remain resolutely committed to ensure that these are achieved and maintained.
Share this on WhatsApp
Related Topics:medical vacationNational BroadcastPresident Muhammadu Buhari
Up Next

How did Nigeria get to automation level of smoldering out the ‘Rodent’ from the fleabag?