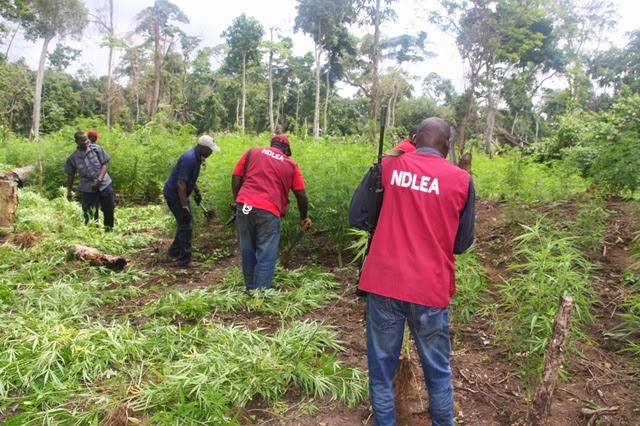 Share this on WhatsApp
Spread the love
The National Drug Law Enforcement Agency, NDLEA, Osun command, has announced the year’s biggest Indian hemp plantation destruction–  a 60.8 hectares of India hemp (Cannabis Sativa) farm at Ikeji Arakeji, in the state.
It’s estimated as about 70 standard football pitches. A standard pitch is maximum 0.82 hectares, indicating the size of the Indian hemp farm is over 74 football pitches.
Samuel Egbeola, the state commandant of the NDLEA, disclosed this Saturday during an interview with journalists at the agency’s office in Osogbo.
According to him, the hemp farm was discovered and destroyed on Thursday, following a tip-off from an informant.
He said the agency also seized 10 bags of already harvested cannabis which weighed 107.4kilograms.
He said two suspects found on the farm during the operation were equally arrested and that the arrested suspects were helping the agency in their investigation.
ALSO SEE: NDLEA destroys 16 Hectares of Indian Hemp farm in Osun
The NDLEA boss assured the people of the state that the agency would always stick to its responsibilities of ensuring a drug free state.
“We are appealing to the people of the state to always relate information on illicit drug operations, especially cannabis farms to the NDLEA.“Our office is always open, so people with useful information are always welcome to come in at any time so we can all work together in ensuring a drug free state.
“It is our mandate to rid the state of illicit drugs and this could only be made possible with the support and cooperation of the people.” he said
He said he was grateful for the support the office has been receiving from the public and urged for more cooperation.
The command had destroyed a 16.8-hectare, Indian hemp farm located in Ikoyi, Osun, on September 26.
Share this on WhatsApp
Related Topics:cannabis SativaIndia hempNational Drug Law Enforcement Agency (NDLEA)Osun STate
Up Next

Autopsy report unveils the cause of Davido’s friend, Tagbo’s death