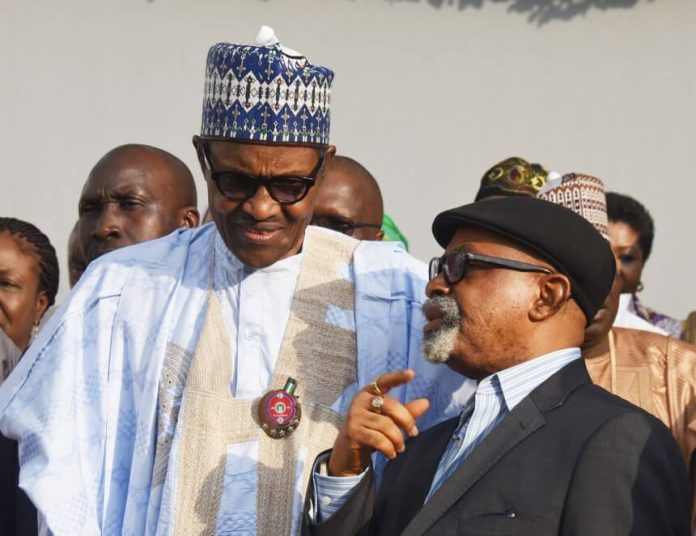 The Minister of Labour, Dr. Chris Ngige, including the Minister of Health, Dr Osagie Ehanire,  has disappointed President Muhammadu Buhari in the handling of the striking medical doctors issues and the unending crisis in the health sector. The President, therefore, intervened, hosting members of the Nigerian Medical Association (NMA) to a meeting at the State House, Abuja, on Friday.

President Buhari at the meeting, appealed to the striking members of the National Association of Resident Doctors (NARD), including other health workers to resume duty. He also urged other health workers, essentially, the NMA members, considering joining the resident doctors strike to have a rethink and consider settlement of issues through negotiation, no matter how long it takes.

President Buhari promised that real debt or claims owed health workers would be paid, adding that the government has increased budgetary allocation to health.

The President in a statement by his Senior Special Assistant on Media and Publicity, Shehu Garba, was cited to have declared: “Debts genuinely owed Health workers will be settled.

“This administration has a good track record of paying all debts owed to government workers, pensioners, and contractors and we have even revisited debts left by past administrations, once due verification is done.

“I learned that some of the 12 points demand in the ongoing strike were already addressed, although the review of a new hazard allowance has not been fully negotiated because of the sharp and deep division within the ranks of the striking doctors.”

President Buhari maintained that embarking on strike was not an option to consider by the health workers who are entrusted with the health management of citizens.

“The lives of citizens that could be lost or damaged when doctors withdraw services, are precious enough to be worth opting for peaceful resolution of differences.

“Protecting our citizens is not to be left to the government alone, but taken as a collective responsibility in which, especially medical professionals, play a critical role.

“Let me speak directly to the striking doctors; embarking on industrial action at this time when Nigerians need you most is not the best action to take, no matter the grievances,” the president stated.

President Buhari emphasized that the outstanding protest of a circular issued by the Head of Service, removing house officers, NYSC doctors from the scheme of service, had an addendum circular from the National Salaries and Wages Commission to clarify that they would continue to earn the wages attached to them on their present wage structure.

He directed the full implementation of the agreement reached at the meetings of August 20 and 21, contained in the MOU.

President Buhari reiterated that budgetary allocations to the sector had been increased, adding that a Health Sector Reform Committee led by the Vice President had been established to identify and address weaknesses in the health system and align with global best practices that raise public confidence.

The president added that the government is also supporting initiatives to expand health insurance coverage and bring more resources to health financing.

President Buhari highlighted: “We have many more challenges ahead and much more to do, for our large population.

“In this respect, it is important to remind you that, as senior medical personnel and representatives of one of the most respected professional groups in the world, your responsibility for the health and wellbeing of Nigerians is clear.

“It does not end only with the welfare of your members but continues with a sense of responsibility for the entire country and its socio-political health and national stability. “The global economy has been seriously affected by the pandemic, and despite recent pleasing news of more than five per cent economic growth of Nigeria in the last quarter, we are still having fiscal challenges to deal with, like most other countries.

“The source of revenue that Nigeria has depended on for so long experienced global decline, our population is rising fast and the tension arising from both is fuelling agitation among our youth. Organisations like the NMA could play a very useful moderating role in society.”

President Buhari’s meeting with the NMA clarified that both the Minister of Labour and Minister of Health were not representing the president in their threat to stop the salaries of the striking resident doctors or replace them with new workers. Both ministers were present at the meeting on Friday.