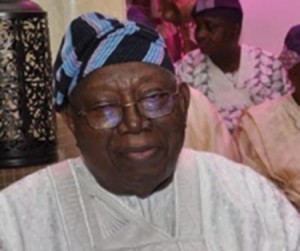 The Nigerian Police Force is enmeshed in deep mourning over the death of the former Inspector General of Police IGP Sunday Adewusi who passed on Tuesday at the National Hospital, Abuja.

The Inspector General of Police, Solomon Arase who expressed deepest condolence and sympathy to the families and loved ones of the late IGP, described the late Chief Sunday Adewusi as a “Nigerian hero who served his nation proudly, as a Police officer, even at retirement.”

He said he was a “transformational leader whose tenure as Inspector-General of Police between1981-1983 remains impactful, across several generations of Police officers.” He noted that throughout his life, he remained a strong member of the Police family; attending all Police official events, even up to the last Nigeria’s Independence Anniversary celebration.

In a statement in Abuja by the Force Public Relations Officer, ACP Adebisi Kolawole added that the Late Sunday Adewusi, was a beacon of hope to the Nigeria Police Force, just as he remained an advocate of policing throughout his life.

Meanwhile, the IGP has set up a Committee to liaise with the family with a view to giving him a befitting burial. A condolence register has also been opened at the Force Headquarters in Abuja for sympathisers.

Reacting to the death, a former IG of Police, and Chairman of the Police Service Commission, Mr Mike Okiro, described the late Adewusi as an “icon of democracy, who left a lot of legacies in the police; noting that it was during his time the Armoured Personnel Carrier (APC), was introduced in the police.