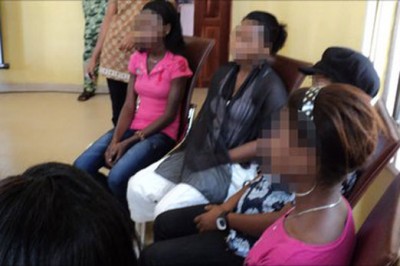 A man has been arrested at the Aflao Border Post for allegedly attempting to traffic two Ghanaian girls through the Togo border to board a flight to Saudi Arabia.

The suspect, 35-year old Utham Nasir Ismail, was apprehended by immigration officers, who also rescued the 19-and-21-years-old women. National Daily gathered that Ismail had claimed to be a trader who buys Woodin clothes and ginger to sell in Nigeria from Ghana.

Gifty Amgborm, senior inspector of the Ghana Immigration Service, GIS, Public Affairs Unit-Headquarters in Accra, revealed the girls were recruited from their hometowns-of Ejisu in the Ashanti Region and Krachi in the Volta Region-through the help of an illegal recruiting agency to work as domestic workers in Saudi Arabia.

“Ismail is said to have acquired Ghanaian passports for his alleged victims and also secured for them Saudi Arabian working permit to enable them stay and work in that country for a monthly salary equivalent to GHC1000 upon their arrival.

“Further information gathered indicates that, the suspected trafficker has been aiding other groups of girls outside the country for some time now,” she added.

Ismail is now in the custody of the Anti-Human Smuggling and Trafficking in Persons (AHSTIP) Unit of the GIS assisting with investigations.