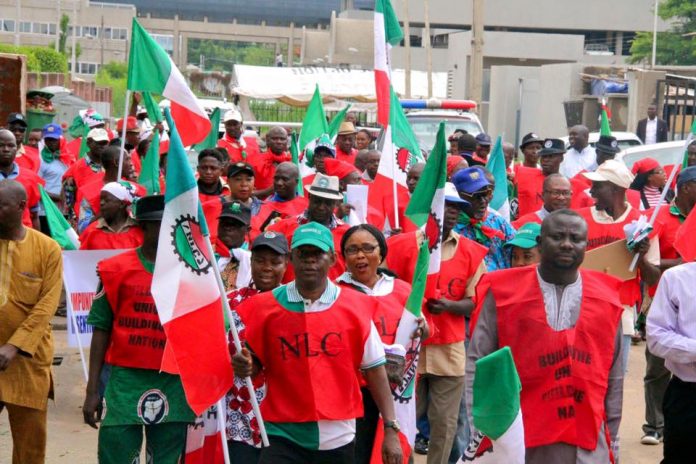 Following suspension of the strike action promised by both the Nigeria Labour Congress and the Trade Union Congress to protest the increases in pump price of PMS and Electricity tariff, Coalition of United Political Parties (CUPP) has said the ordinary man on the street has lost confidence, trust, and faith in their ability to actually speak or act for them.

In a statement by the National Secretary of the group, High Chief Peter Ameh, CUPP believes that NLC and TUC do not have the capacity to represent the interest of the Nigerian people and as such have no answer to these questions.

“NLC and TUC cannot claim to be unaware of the suffocating and life threatening suffering being experienced by the Nigerian people as a result of the Covid-19 pandemic.

“And then to add salt to the injury the government without consultation carried out an arbitrary increase on the price of PMS per litre and the cost of electricity tariff per unit simultaneously without any soft landing measures to cushion the effect of such increase on the masses.

“The masses must develop the will to speak for themselves on these matters that are meant to enslave and imprison their conscience and  destinies. We all know that all is not well in Nigeria, politically, economically and socially and this administration is still rolling out policies that will finally destroy the little fragment of life left with the masses while NLC and TUC refuse to act to protect the interest of the people.

“If the NLC/TUC meant well for the people, they would have insisted on using the two weeks as opportunity for people to protest and voice out their grievances for the rulers to hear and know how to mend their ways rather than to use the two weeks to silence the people and devise ways to deceive us as usual.

According to the CUPP, with the current transportation cost and high food prices and almost all due to fuel price increment, even workers earning minimum wage of N30,000 cannot afford to cope with hardship and difficulties heaped upon him/her as a result of the increases.

“We as an organisation have always been advocates of the removal of fuel subsidy to free up funds for infrastructural development, but such removal must be done with consideration for the persons in the lowest rung of our society.”