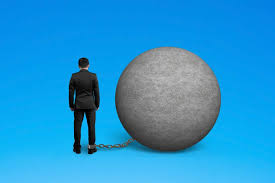 Experts at CSL stockbrokers limited, say Nigeria’s debt position puts the economy at the edge of a fiscal crisis if the government does not find ways to manage its fiscal position.

The present figure shows an increase in the debt stock of N1.32 trillion.

According to the information released by the Debt Management Office (DMO), Nigeria has so far spent N76.951 billion to service its debt in the second quarter of 2019.

According to the experts, Nigeria’s tax revenue to GDP ratio remains one of the smallest in the world which implies there exists a strong revenue potential from taxes.

“We believe improved transparency and efficiency in the tax collection process would also provide a significant boost for government revenue given that many people and institutions are still outside the tax net.

“Finally, we believe the Federal Government needs to rein in on its “wishful” spending habits. The irony of having one of the highest cost of governance in a country where many live under extreme poverty conditions continues to impact on recurrent spending.

They explained that attempts by the government to bear a significant portion of the burden of bridging the infrastructure gap is unhealthy for its finances.

“In our view, the federal government needs the back seat as a policymaker and regulator while creating policies that will encourage the influx of private capital into sectors where key infrastructure needs revamping.”