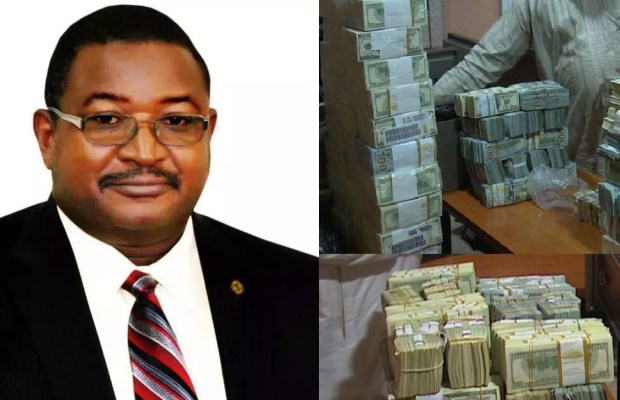 The former Group Managing Director, (GMD), Nigerian National Petroleum Corporation, (NNPC), Andrew Yakubu, who was arraigned before Justice A. R. Mohammed of the Federal High Court, Abuja on a six-count charge has been reminded at the Kuje prisons.
National Daily learnt that Yukubu is being charged by the Economic and Financial Crimes Commission (EFCC) for money laundering, nondisclosure of assets and fraud.
Yakubu, who was arraigned on Thursday was arrested following the discovery on February 3, 2017, by EFCC of a staggering sum of $9,772,000 and £74,000 stashed in a huge fire proof safe.
Following the raid, Yakubu on February 8, 2017 was said to have reported to the Commission’s Kano Zonal Office where he admitted being the owner of both the house and the money recovered.
National Daily learnt that the offence breaches Section 7(4)(b)(ii) of the Advance Fee Fraud and Other Related Offences Act, 2006 and punishable under Section 7 (5) of the same Act.
One of the counts reads: “That you, Andrew Yakubu, (while being the Group Managing Director of Nigerian National Petroleum Corporation-NNPC) sometime between 2012 and 2014 in Abuja within the jurisdiction of this Honourable Court with intent to avoid a lawful transaction under law transported at various times to Kaduna the aggregate sum of $9,777,800 only when you knew or reasonably ought to have known that the said funds formed part of the proceed of some form of unlawful activity and thereby committed an offence contrary to Section 7(4)(b)(ii) of the Advance Fee Fraud & Other Related Offences Act, 2006 and punishable under Section 7(5) of the same Act.”
Although the defendant pleaded not guilty to the charges, in view of his plea, the counsel to EFCC, Prince Ben Ikani informed the court that the prosecution is ready for trial in line with the ACJA.
However, Yakubu’s counsel, Ahmed Raji, (SAN), through an application dated March 13 prayed the court to admit the defendant to bail pending trial on self recognisance or on the alternative, admit him to bail on liberal terms
Raji also applied that his client’s international passport should be released to enable him embark on a three week medical trip noting that the defendant had no criminal record, adding that he was invited by the EFCC and voluntarily surrendered himself.
Justice Mohammed adjourned to March 21, 2017 for ruling on the bail application and ordered the defendant to be remanded in Kuje prison.