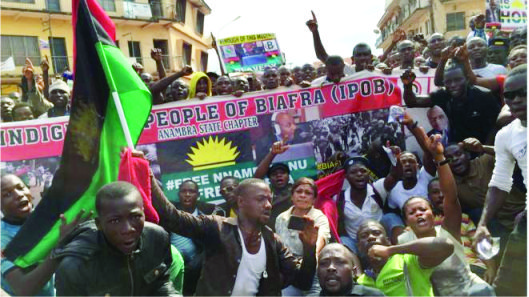 THE fear of another pogrom in the northern part of the country , which led to the three year civil war has compelled the 19 northern states’ governors to take adequate measures to prevent the Biafra protest from spreading to the region.
In their quest for sovereignty, certain Igbo elements under various groups have begun to agitate for the sovereign state of Biafra for people living in the country’s south eastern states of the country.
To press home their demand, they have been holding protests in different parts of the country, the most recent being the one staged in Onitsha, Anambra state, last Wednesday in which no fewer than 13 persons were killed.
During the violence, apart from preventing vehicular traffic on the popular Niger Bridge, the rioters had torched places of worship in the commercial city.
According to the Borno State governor and Chairman of the 19 Northern Sates’ Governors’ forum, Alhaji Kashim Shetima, measures are being put in place to ensure that the Biafra protests do not spill to the northern part of the country especially the volatile states in order to prevent the type of crisis that led to the 1967-1970 civil war in the country in which over one million lives were believed to have been lost.
Speaking on behalf of the governors, Shettima said the state chief executives, had, since the incident, been in touch with one another having taken some firm measures aimed at averting any spill-over of the protests.
Shettima said the governors took the undisclosed measures, following media reports claiming that worship places were torched during the Wednesday violence in Onitsha.
The protesters who pressing for the release of detained renegade radio Biafra Director Nnamdi Kanu staged a three-week-long pro-Biafra protests which turned bloody last week resulting in loss of lives and injuries to many in Onitsha, the commercial hub of Anambra State.
The northern governors condemned the violence in its entirety but appealed for calm, adding that all Nigerians must realise that the evil being perpetuated by the Boko Haram insurgents against Muslims, Christians and followers of other religions regardless of their geo-political divides in the last six years, was more than enough trouble for the country hence the need to come together as a single unit to collectively fight terrorism that is a threat to all now.
According to the chairman of the northern governor’s forum, “we condemn the crisis in very strong terms. The governors of volatile states in the north in particular, have been in critical touch with one another to share thoughts and have collectively taken firm measures to ensure that the violence doesn’t spread to any part of the 19 northern states and we will also be working with our colleagues in the south to nip the crisis in the bud as we cannot afford another civil war during this period of repositioning the ailing national economy and putting in place adequate infrastructure that will turn around the country’s socio-political development.
“However, it is surprising to the Northern States Governors Forum that any Nigerian at all can even contemplate any kind of violence when we already have serious problems with Boko Haram insurgents that are killing Muslims and Christians alike, killing northerners and southerners, attacking Mosques, Churches and markets, in an effort to kill all of us that do not subscribe to their interpretation of Islam.
“We have Boko Haram that kill Hausa, Fulani, Ibo, Yoruba, Kanuri, Ijaw and anyone they are able to come across. We thought that the existence of Boko Haram should have been enough to make all Nigerians fuse into one and fight a common enemy. It is really sad that any Nigerian can contemplate violence.
“We are not blaming any individual or group because there are security agencies whose job it is to safeguard lives and property and conduct investigations where necessary. We beg all Nigerians to be calm and to go about their duties in peace. We have got more than enough problems to worry about as a country. We can’t afford any distraction that will shift our focus from the bigger problems of Boko Haram that has an ambition of sending the human race into extinction.
“We urge all Nigerians to be calm. We particularly call on all Nigerians living in the northern States not to pay attention to differences in religion and ethnicity but rather, see each other as Nigerians with equal residential rights and fundamental human rights that include freedom to lawfully reside anywhere in Nigeria, freedom of worship, movement, trade, association, education, healthcare and other rights as provided by the Nigerian constitution.
“We particularly call on our youths not to allow anyone use them for any purpose because youths have suffered more than any other age category from the hands of Boko Haram insurgents and that is more than enough. Our focus should be on how to end the Boko Haram insurgency and not to be driven into any other crisis. We have suffered too much, we must say no to any crisis.
“As heads of governments of the 19 northern States, we will by the grace of God, do everything humanly possible to ensure that no resident, regardless of his or her ethno-religious background, is denied any of these rights. As Nigerians, we are one, we need one another and we must live as one people,” he concluded.

Code of Conduct Tribunal vs Saraki: Free speech and politics of contempt